If you love cinnamon rolls and layer cakes, you are in the right place! This Cinnamon Roll Cake is a tasty and pretty combination between the two!

What is special about this recipe

This cake is made of sponge base rolled up with cinnamon frosting and covered with vanilla cream cheese frosting. It is pure deliciousness in every bite! It is also easy and relatively quick to make, if you follow the recipe steps!

What ingredients you need

You need only common ingredients for this recipe. Below is a short list and you will find the exact quantities in the recipe card.

The sponge base is made of eggs, all-purpose flour, cornstarch, brown sugar, vanilla and cinnamon. The brown sugar and the cinnamon create a nice brownish shade, like a real cinnamon roll.

The detailed instructions are below the post. Here you can find a short summary of the most important steps.

First you need to bake the sponge base. Preparing it is simple: beat the eggs with the sugar and gradually add the dry ingredients.

After baking the base, you need to roll it up immediately together with the sheet of parchment paper underneath. That way you won’t risk breaking it as you roll it.

Prepare the cream cheese frosting and divide it in two parts. One you will mix with the coconut sugar and ground cinnamon in order to spread on the base.

The second part would remain white and would be used to frost the cake all around.

This cake was a real hit in our house and it disappeared very quickly. I hope you would like it too! Let me know in the comments what you think about it! 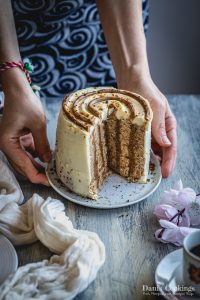 Cake Pan Conversions CalculatorAdapt any cake recipe to your pan with this calculator!
Tried this recipe? Show me your creation!Mention @daniscookings in Instagram or tag #daniscookings!
« Cinnamon Walnut Star Bread
Healthy Apple Cobbler »