Made completely from scratch, this Easy Black Forest No Churn Ice Cream Cake is a very tasty combination of brownie base, vanilla cherry ice cream and chocolate ice cream. It is topped with chocolate glaze and fresh cherries! And you need less than an hour to prepare all that deliciousness before putting it in the freezer. It might sound surreal but surely you too can make the same cake by following the recipe below. 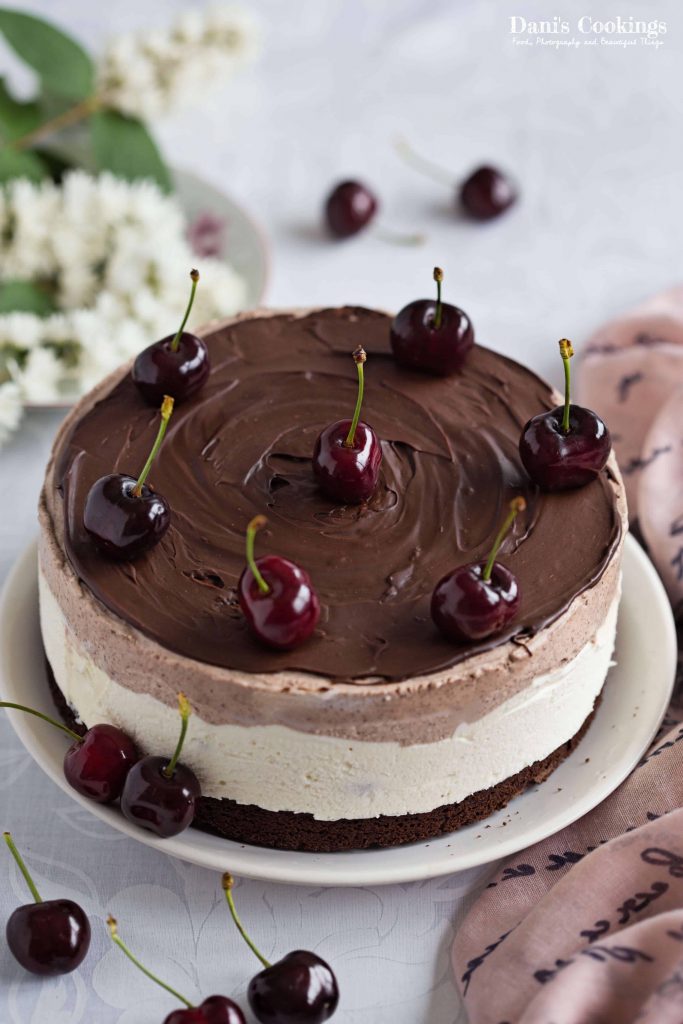 Why making an ice cream cake at home

Since I discovered that I can prepare fantastic homemade no churn ice cream, I am almost totally ignoring the store bought kinds. My first homemade recipe was the No Churn Lemon Cheesecake Ice Cream. It turned out really delicious and I also received great feedback from people who made it. I realised that there are so many wonderful ice cream variations that can be prepared just in the freezer. I was so excited with that realisation that I decided to try a homemade completely from scratch No Churn Ice Cream Cake. That was a really big deal!

I know some of you might not like to read personal revelations and sentimental childhood memories but I need to make a small confession in order to give you the background why that cake means a lot to me. When I was a kid the simple wording “Ice Cream Cake” for me translated into “the greatest deliciousness that have ever been invented in the universe and that only good kids can have once in 100 years”. Yes, indeed, during my childhood in the 1980s in Bulgaria the ice cream cake was a legendary dessert that I have been promised to have but I don’t think I ever saw in the stores. So I only got the chance to try this famous dessert around the time when I was already 15 or 20 years old. I can’t recall the very first time I got the opportunity to eat a piece of ice cream cake but I can only remember that it was somehow disappointing. 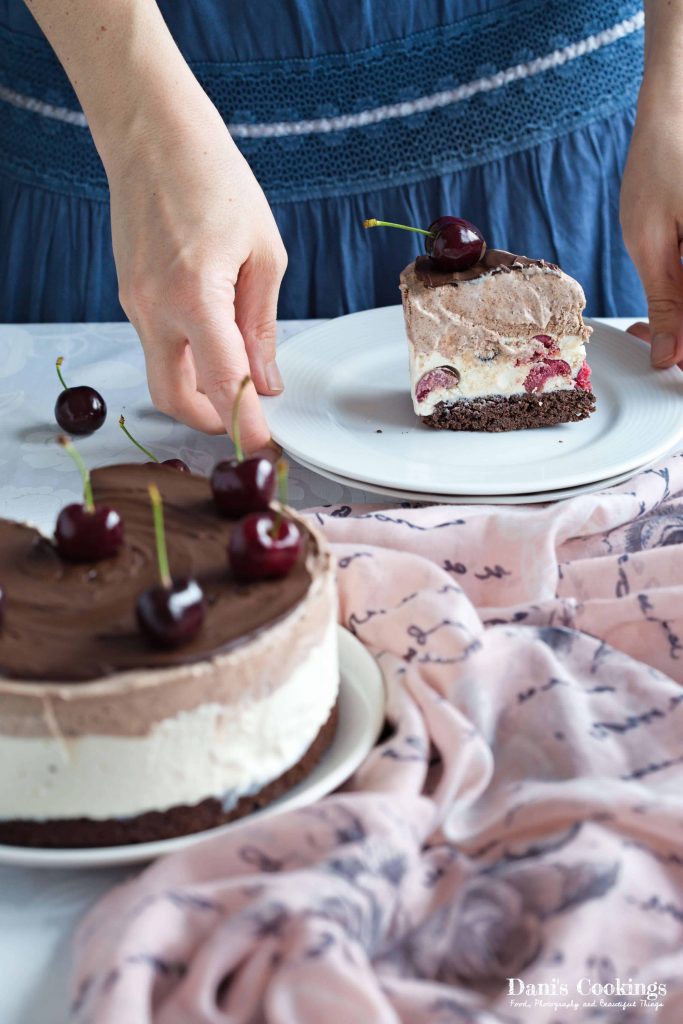 After so many years the concept of ice cream cake doesn’t seem that exciting to me any more. I think one of the main reasons is because the good ones are not easily found. But believe it or not, the current cake is among the best I have ever tried! 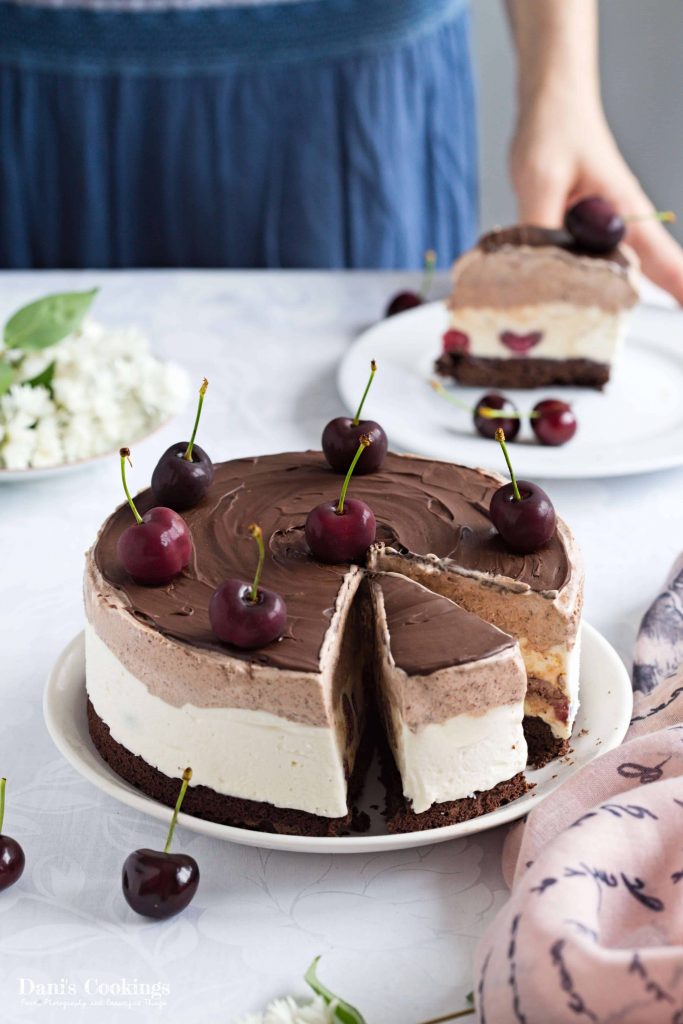 What makes this recipe so good

It has a tasty brownie base on the bottom. The vanilla cherry ice cream layer is creamy and full of frozen fresh cherries. The chocolate layer is very delicious and creamy as well. The combination of chocolate, cherry and vanilla is simply great. And to be honest, only after tasting it I realised that it was actually a “Black forest” dessert.

Same as many of my other recipes, this one is also very quick and easy. I made the cake one evening, almost half sleeping – certainly not in my best shape. 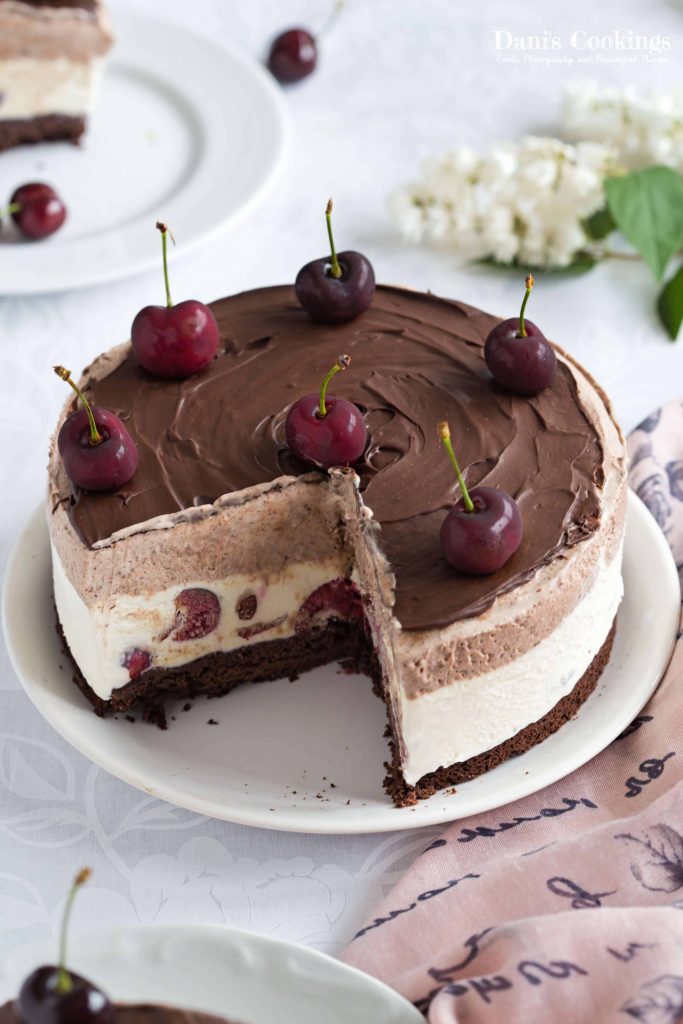 And in case it is not the cherry season when you decide to follow this recipe: you can make it also with cherry jam, with frozen cherries or with any other nice fruits that you might like. It will not be Black Forest any more but it will be still delicious for sure! 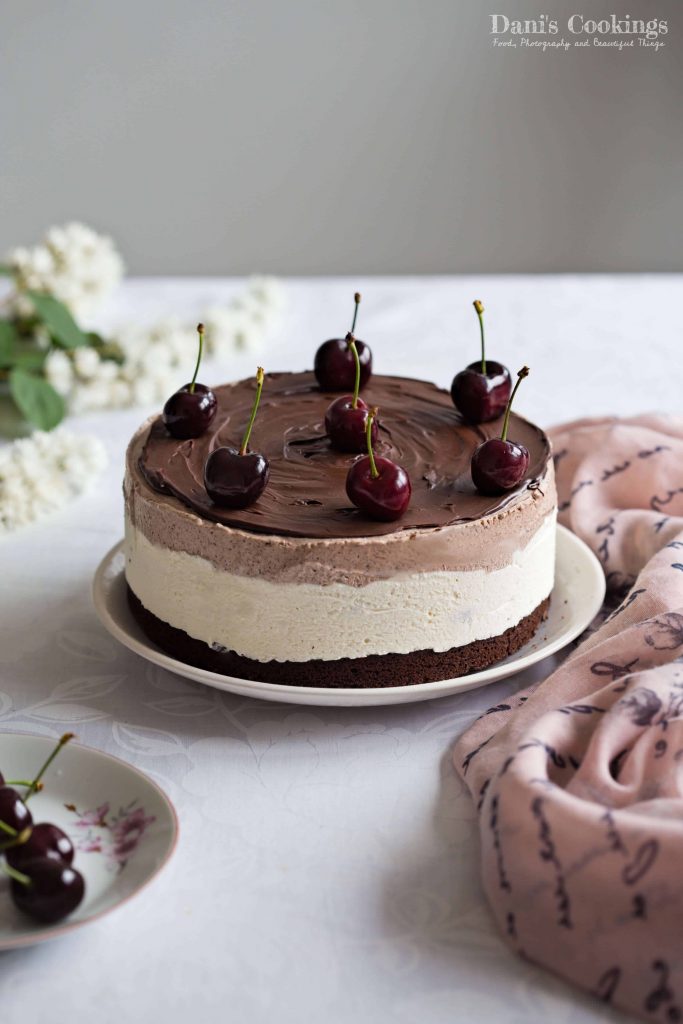 Let me know in the comments what you think about this recipe! If you made it, please share how it went! 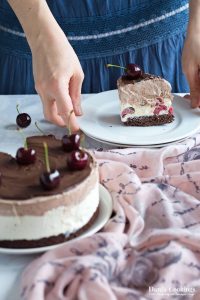 For the Brownie Base:

For the ice cream layers:

Refrigerate the cream for at least 6-8 hours on the top rack of the fridge, before whipping it.
Cake Pan Conversions CalculatorAdapt any cake recipe to your pan with this calculator!
Tried this recipe? Show me your creation!Mention @daniscookings in Instagram or tag #daniscookings!
358 shares
Previous Post: « Raw Carrot Coconut Truffles
Next Post: Apricot Cake Roll »