This delicious and elegant Raffaello Cake is made of light and fluffy sponge almond layers with coconut cream frosting between them and whipped cream white chocolate frosting on top. It is a coconut almond dream, named after the loved Ferrero praline.

Origin of the recipe

You can find multiple Raffaello Cake recipes on the Internet. Some of them are baked, others are no bake. It is hard to define the “original” Raffaello cake recipe: I don’t think there is such.

The real authentic dessert is the famous praline created by the Italian manufacturer Ferrero and introduced on the market in 1990. It has become a favourite of many people all around the world due to its light and delicious taste, crispy texture and wonderful almond coconut flavour.

This praline is a favourite also of my mom. That’s why this year I decided to bake a birthday cake for her inspired by her preferred candy. Unfortunately she become ill exactly on her birthday, and so was my son so I couldn’t bring her the cake. Still the cake was made and we ate it at home for her.

This cake is very light due to its sponge almond layers. I decided to use the technique of the Linzer Cookies and mixed almonds with flour in the food processor. This would guarantee you a smooth texture and is much easier than mixing the all purpose flour with almond meal (which is also the more expensive option).

The layer recipe calls in addition for coconut sugar, baking powder, baking soda, eggs and milk. Oil or butter are not needed in this recipe!

This airy and fluffy cake is best with a creamy frosting. I used one can of coconut cream to make the frosting between the layers. In addition I also used cold whipping cream mixed with melted white chocolate for the frosting on top.

The overall combination of tastes and flavours is really great. If you want to add some crunchiness to this cake, decorate it with shredded coconut, almond flakes, chopped almonds or even crushed wafers.

I can’t say if this is the best Raffaello cake recipe but surely it is tasty, relatively easy to prepare and very elegant so you can make it even for special occasions!

Here is a short selection of Raffaello cake recipes from other sites which I found interesting:

Let me know in the comments what you think of this cake recipe! If you liked it, please share it in Social media! 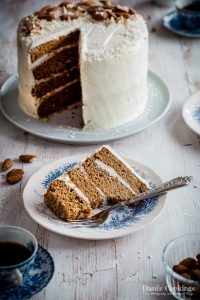 For the cake layers:

For the coconut cream frosting:

For the white chocolate cream frosting:

Cake Pan Conversions CalculatorAdapt any cake recipe to your pan with this calculator!
Tried this recipe? Show me your creation!Mention @daniscookings in Instagram or tag #daniscookings!
« Easy Tres Leches Cake (+ recipe history)
No Bake Keto Cheesecake »