You probably won’t believe that a layer cake which doesn’t contain dairy and eggs can taste absolutely divine… But it’s true! Below is the recipe of the Best Vegan Chocolate Cake: moist, delicious and healthy! 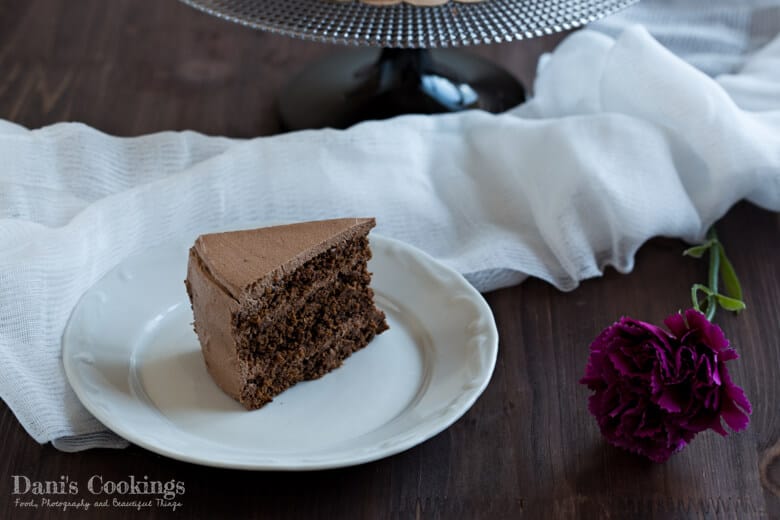 I am not a vegan, neither vegetarian but I like to experiment. I also know that even people who can’t eat dairy and eggs due to health conditions still would like to indulge in moist and tasty cakes sometimes. This recipe is for them and not only: even if you don’t normally avoid animal products, you will be impressed by the taste of this cake. You would never guess it is vegan if you didn’t know it. 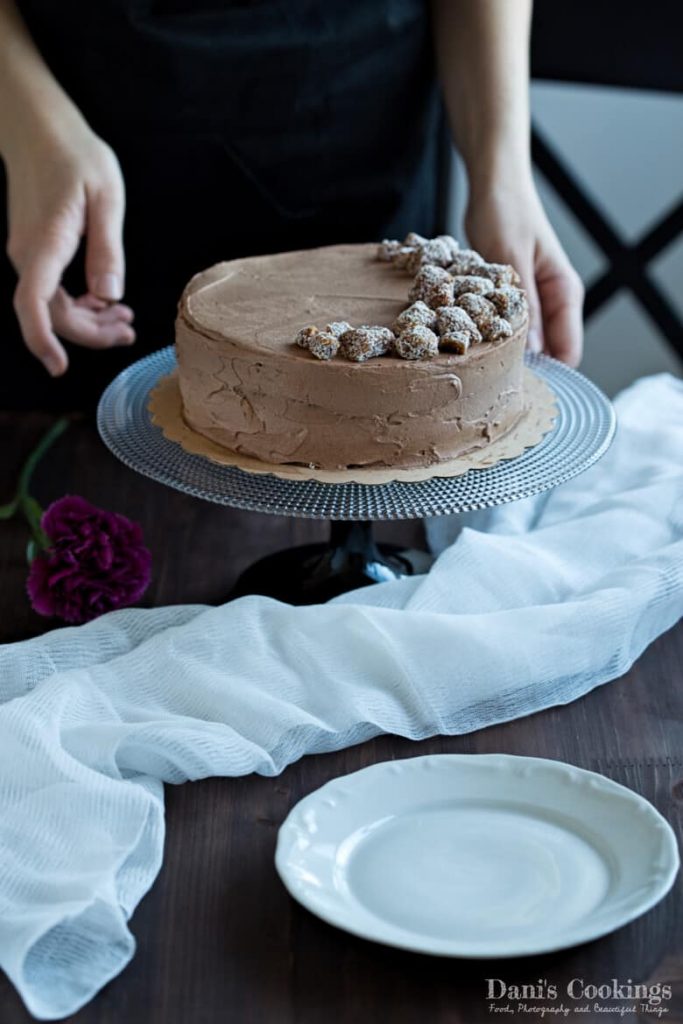 What makes this Vegan Chocolate Cake so great?

The layers are moist and delicious, made of spelt, coconut flour and flax seeds. Here is a trick you might not know: you can easily substitute eggs in different desserts with ground flax seeds or chia seeds soaked in water. This mixture creates a texture that keeps the structure of the baked goods.
The layers of the cake are covered by a wonderfully delicious coconut chocolate mousse. if you haven’t tasted a chocolate mousse made of coconut cream, you surely don’t imagine the rich and delicious taste that it has! Since I tried it I am not sure any more if I prefer the chocolate mousse made with real chocolate and dairy (like for example the Double Chocolate Mouse with Raspberry sauce) or the one made of coconut cream and cocoa powder. 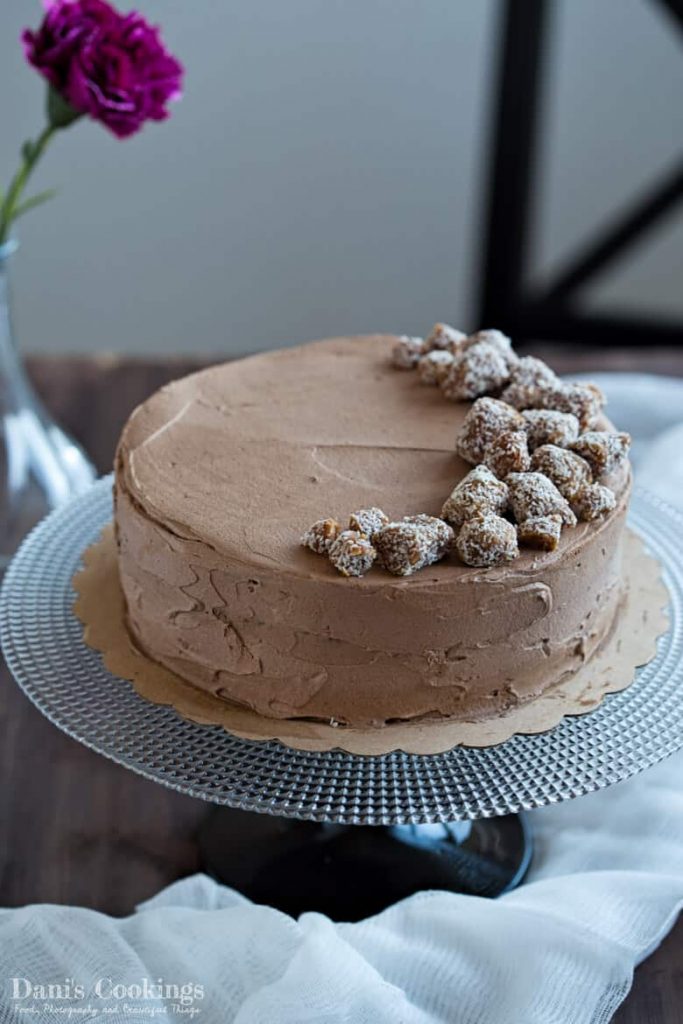 Why this Vegan Chocolate Cake is healthy?

Many vegan cake recipes call for margarin which is practically vegan butter. I don’t like very much that product as it often contains unhealthy trans fats. The Vegan Chocolate Cake is made with olive oil, considered one of the healthiest oils in the world. Olive oil is liquid so it gives more moisture to the layers. Well, you can substitute it with another vegetable oil but it might not be as healthy.
Spelt flour and flax seeds are well known healthy ingredients as well, very rich in different vitamins and minerals. 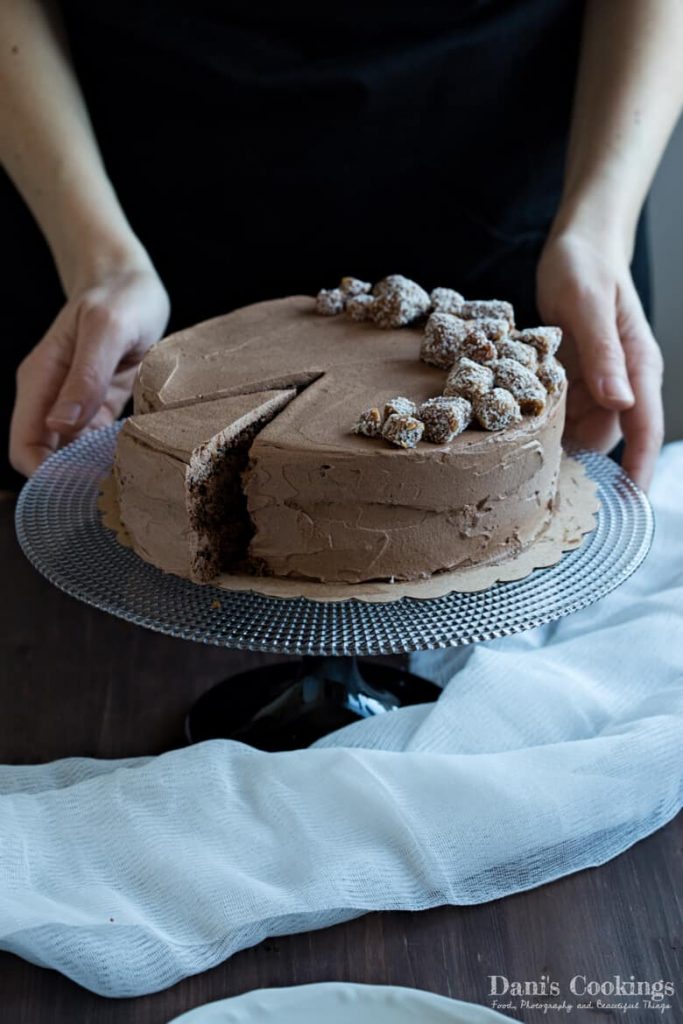 There is nothing complicated in the preparation of this cake. Just bake the base it in one pan, cut it in three layers and frost it all around with the coconut chocolate mousse. The mousse is also very easy to make and takes only about 15 minutes.

Certainly this cake will bring you a lot of joy and a great chocolate satisfaction without much guilt! 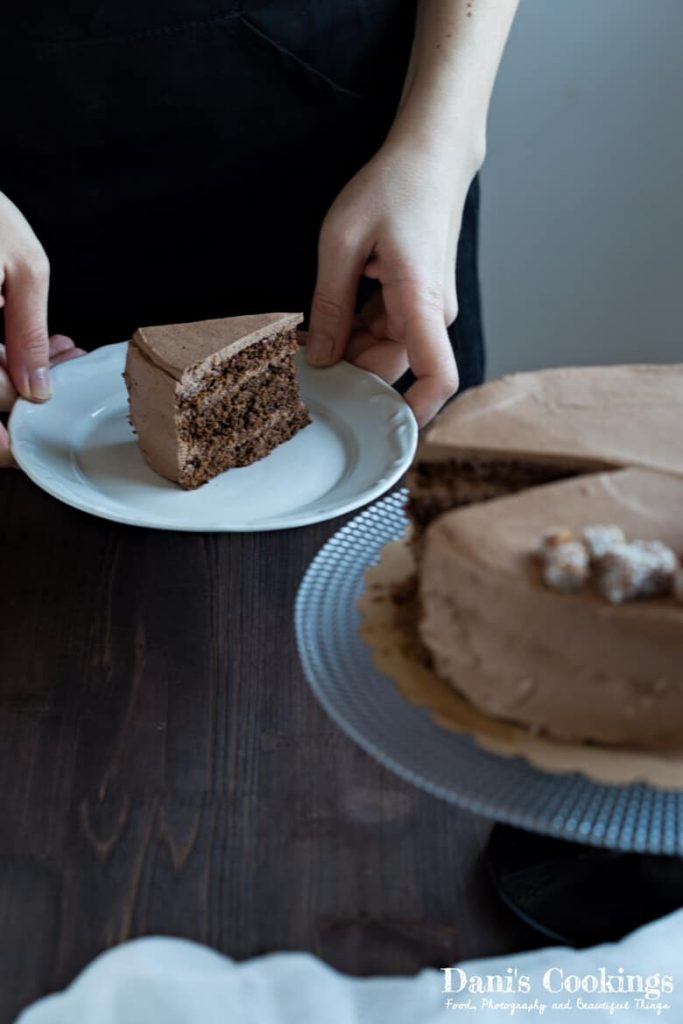 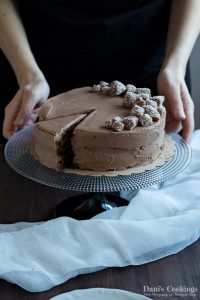 For the Coconut Chocolate Mousse:

- The coconut cream must be refrigerated for at least 6-8 hours in advance
- Instead of soy milk you can use almond or rice milk
- You can change the proportions of the dark and light brown sugar
Cake Pan Conversions CalculatorAdapt any cake recipe to your pan with this calculator!
Tried this recipe? Show me your creation!Mention @daniscookings in Instagram or tag #daniscookings!
461shares
Previous Post: « Food Photography tips for beginners: camera, styling, composition and more
Next Post: Apple Dump Cake From Scratch »