In case nobody has noticed yet, recently I am totally addicted to cakes (not that I normally hate them 🙂 ). I just can’t stop baking and decorating cakes, preferably layered and with tones of frosting. I agree, cakes are not really part of a healthy diet but I just can’t help it. I don’t eat too much of my cakes but I always give away to friends, relatives and acquaintances.
The celebration for the first steps of my friend’s daughter was a perfect reason for a new cake. I spent some time figuring out the decoration before deciding eventually to go with shoe designs. I believe one of the first things every girl should learn in life is that beautiful shoes will be her Best Friends Forever (well, sometimes very mean friends who can make your day incredibly painful, but yeah, still the best ones to make you feel like a goddess!). Certainly the adorable young lady will learn this lesson from her mother (who is obsessed with high heels even though in snickers she must be taller than a man of medium height), however I thought it was a good idea to make her an educational cake.
The second big decision I had to take was about the cake batter. Chocolate was not a good idea because not everyone likes it. Neither I wanted to make anything too fancy. It had to be simple, pretty and funny cake. In this case nothing could be better than funfetti.
For the ones that never heard about funfetti I will clarify that it is a cake (or any other dessert actually) with multicolour sprinkles added to the batter. The final result is quite colourful and it looks perfect for kids’ celebrations.
To make a funfetti cake I needed multicolour sugar sprinkles. But finding them in the shops was a big challenge. The only ones I managed to purchase were predominantly light yellow which is not the best colour for funfetti because it would disappear in the batter… I didn’t want to use nonpareils (the little balls) as I found out that they are not suitable for this purpose. So at the end I made a mix of confetti (I had very little of them), the yellowish sprinkles and some chocolate sprinkles. Not sure which ones worked best but the final result was good.
Unfortunately I had to leave the party just an hour after it started, so I didn’t manage to take pictures of the sliced cake. I want to give special thanks to my friends Iva (party host) and Geri (event photographer) for providing me with photos of the cake after it was cut. On one of the pictures you can see also the beautiful young party lady with her mother and her adorable cousin. Looks like I made the cake decoration in the right colours, doesn’t it? 🙂
The recipe is inspired by Sally’s baking addiction. 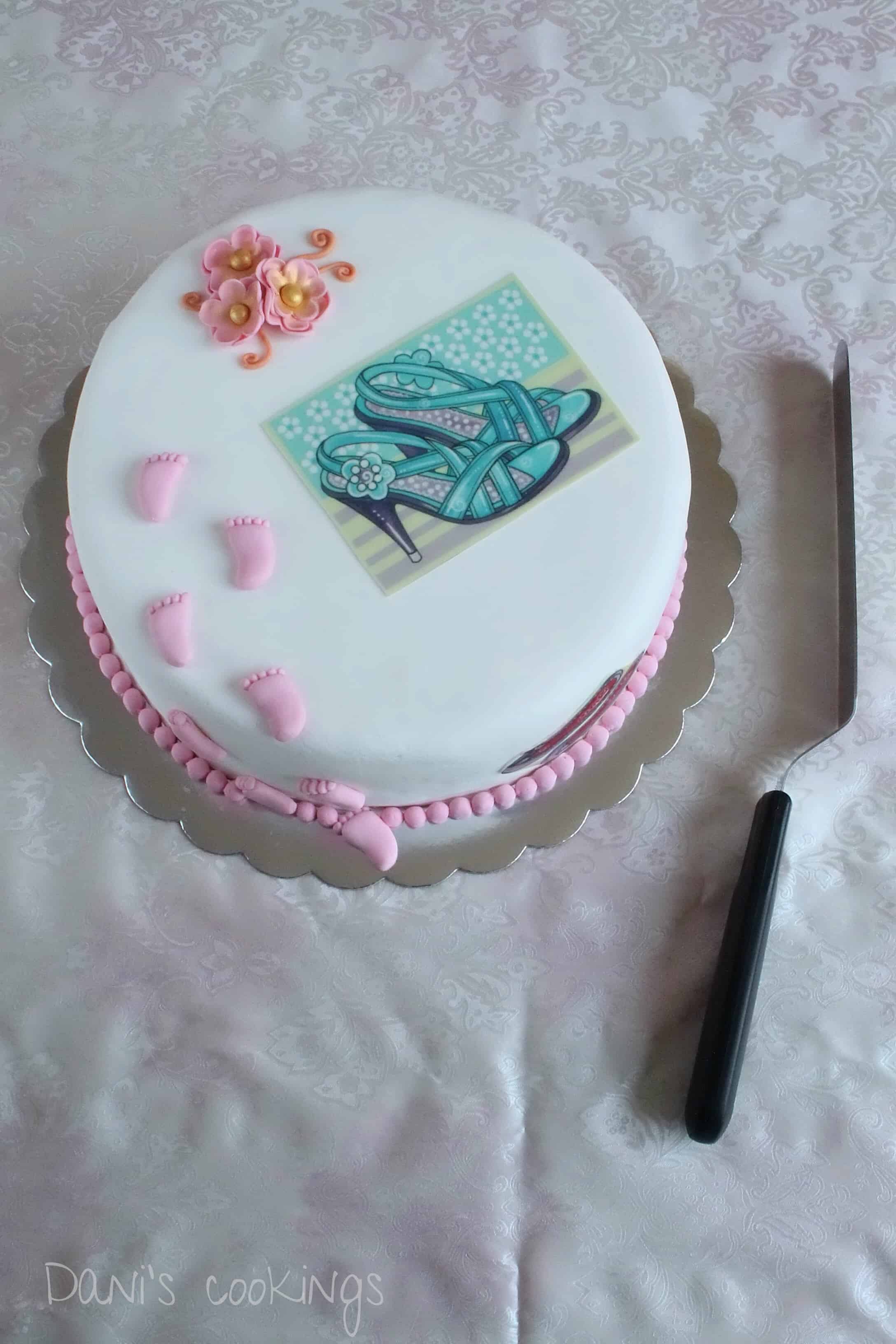 Method
Cake:
Grease a 22 cm cake pan and line it with a circle of baking paper. Preheat oven to 180°C.
Combine flour, baking soda, baking powder and salt in a bowl and set aside.
In a large bowl combine oil, butter and sugar and beat until smooth. Add vanilla extract, eggs and yogurt and mix well. Add the flour mixture and whisk until homogeneous. At the end add the sprinkles and carefully stir until just absorbed by the batter.
Bake the cake for about 60 minutes or until a wooden skewer inserted in the center comes out clean and the top becomes golden brown.
Allow the cake to cool for 10 minutes before carefully running a knife around the edge. Remove it from the pan and let cool on a rack.

Buttercream frosting 1:
In a large bowl beat the butter with an electric mixer until creamy. Add caster sugar and mix until absorbed. Add vanilla, lemon zest, salt and heavy cream and continue beating on high speed until the frosting becomes thick and fluffy. Add sprinkles and mix carefully with a spatula until just absorbed.

Buttercream frosting 2:
In a large bowl beat the butter with an electric mixer until creamy. Add caster sugar and mix until absorbed. Add heavy cream, vanilla and salt and beat on high speed until the frosting becomes thick and fluffy.

Assemble the cake:
When the cake base is completely cooled, use a serrated knife to cut it in three parts horizontally (it is easier if the cake is refrigerated).
Place one layer on a cake stand and spread on top ½ of Buttercream frosting 1. Cover with the second layer and spread over the other half of the same frosting. Cover with the third layer. Frost the cake all around with Buttercream frosting 2.
Decorate the cake as desired (fondant, sprinkles, piped buttercream…).
I ordered printouts with shoe designs on edible frosting sheets (template: Crafts Beautiful). The baby steps are made with a silicon mold. The flours are my creation. 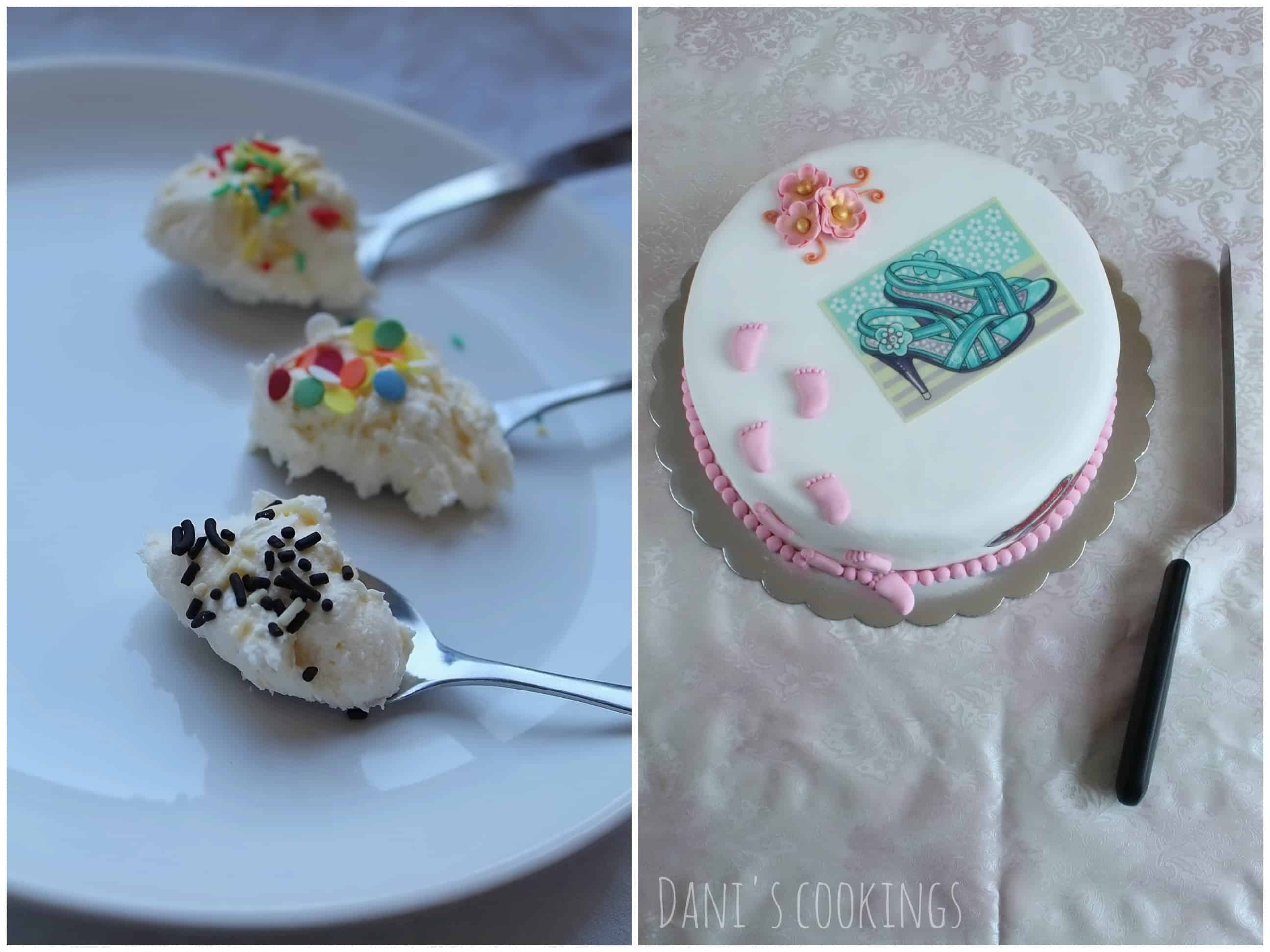 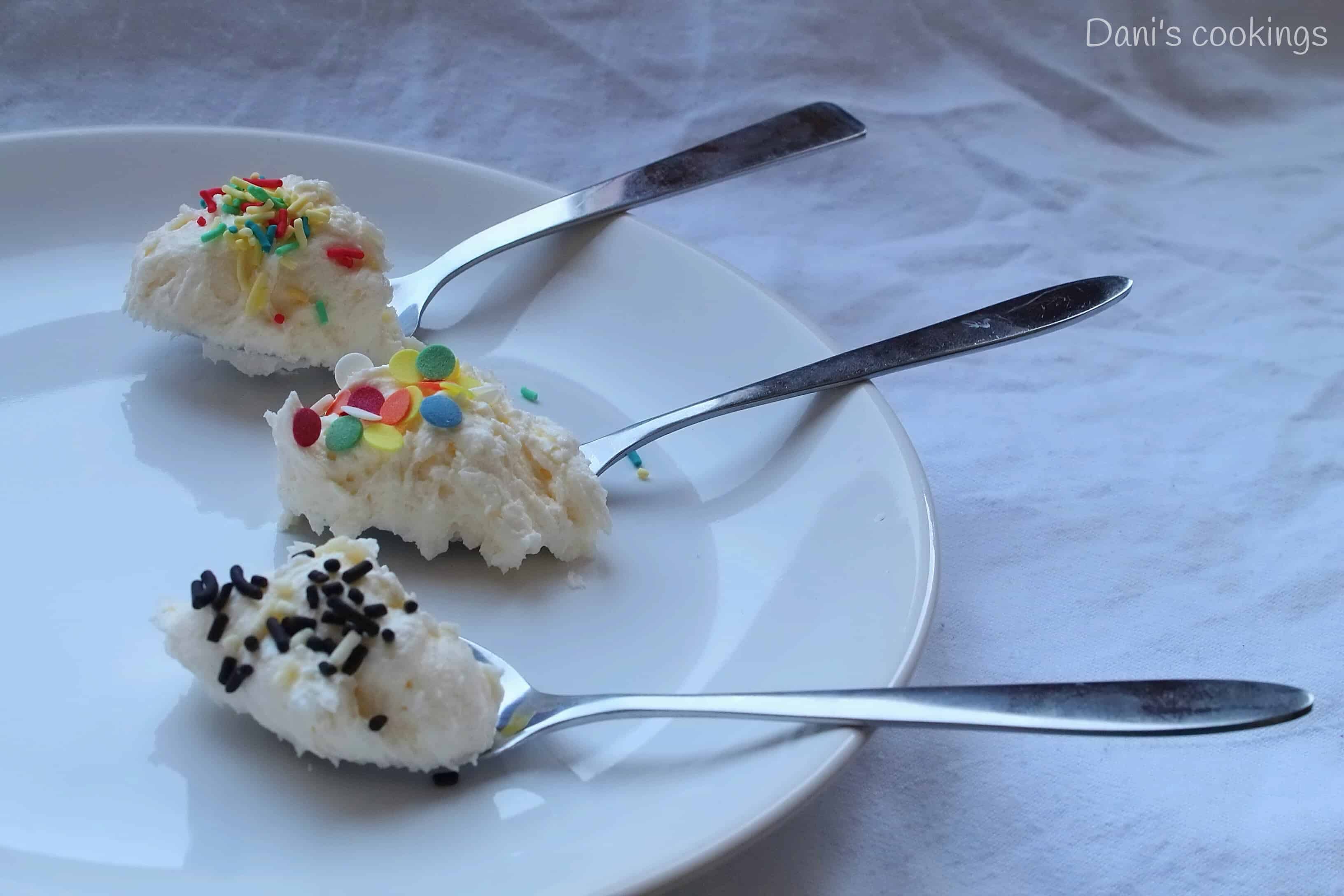 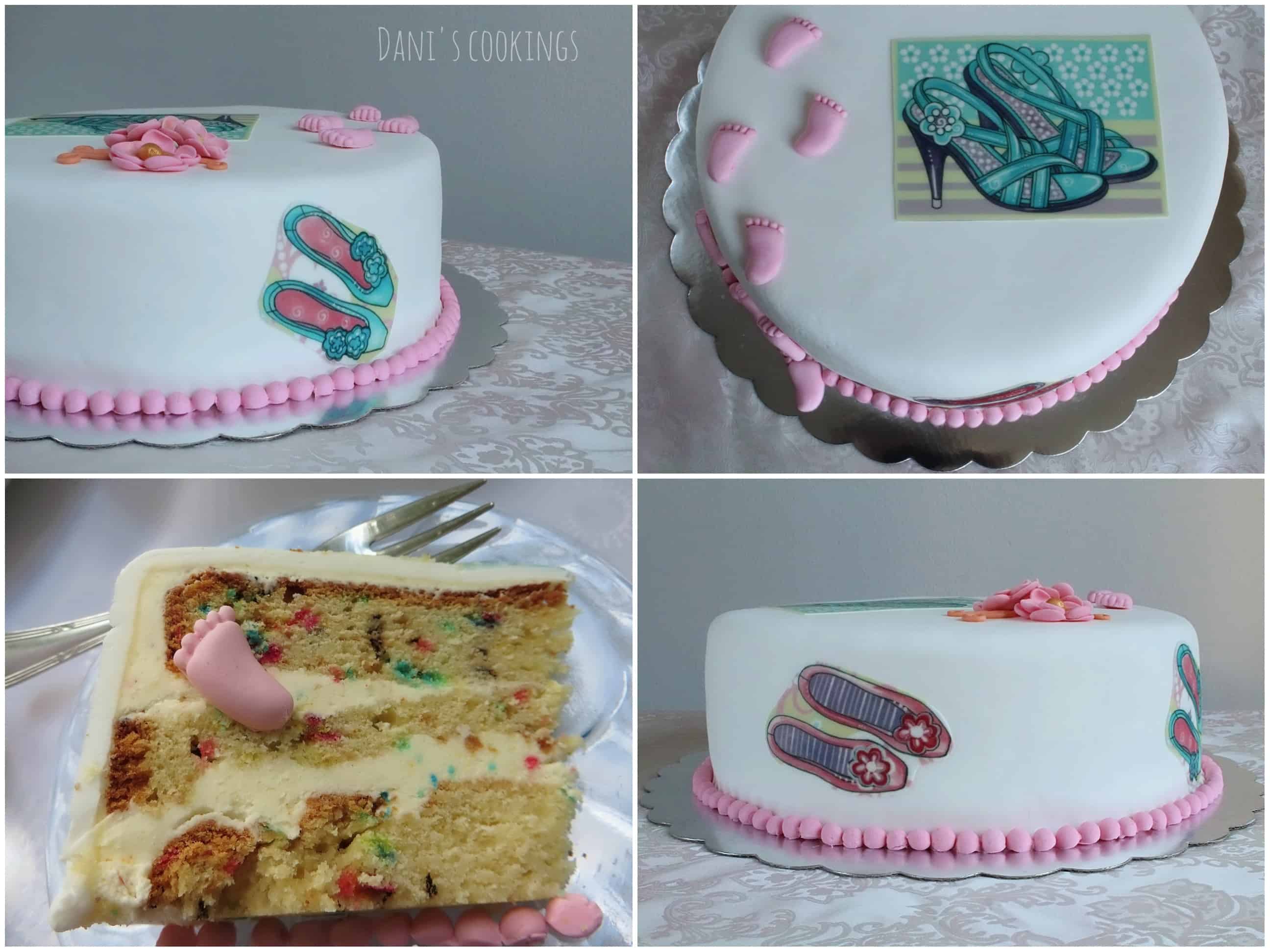 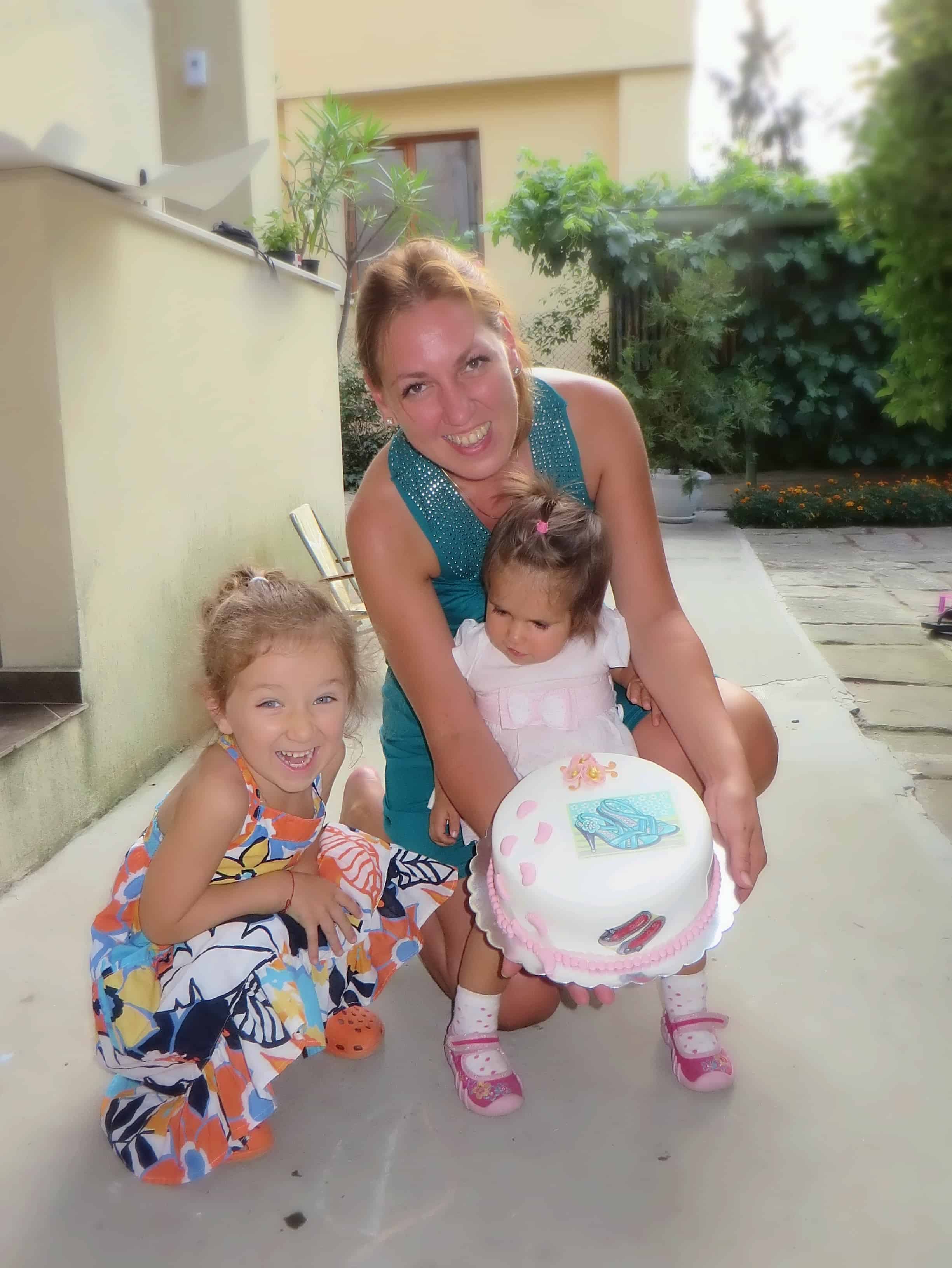