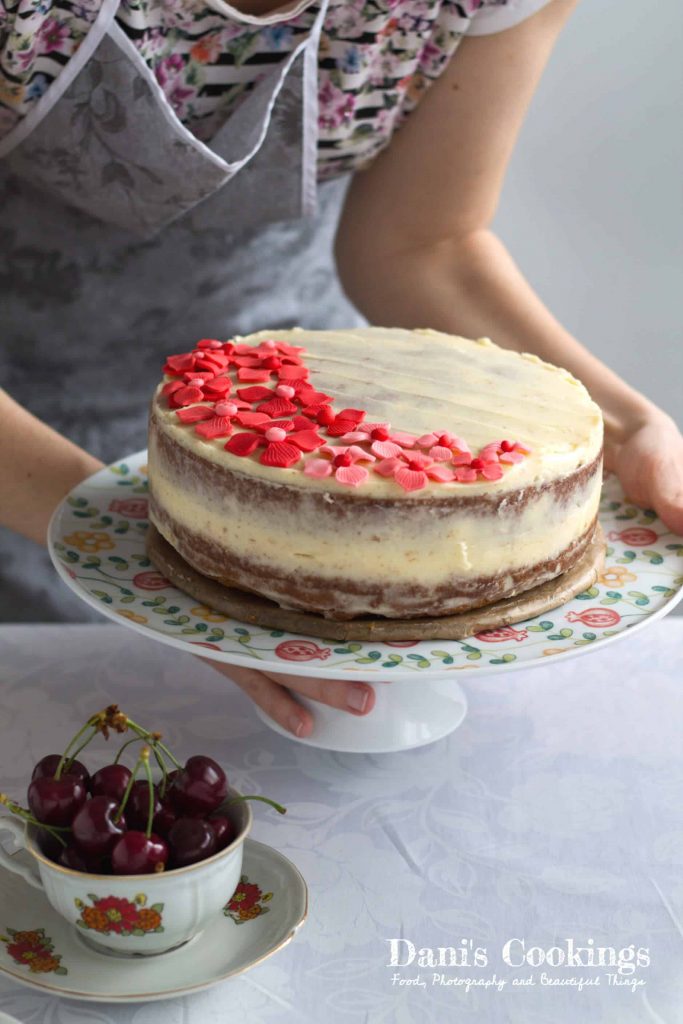 Cherry season is finally here! I love eating cherries so much but I also love baking cherry cakes. Like my super decadent No bake Cherry Cheesecake and the beautiful and tasty Cherry Almond Cake. Both desserts were made with fresh cherries and a lot of love! 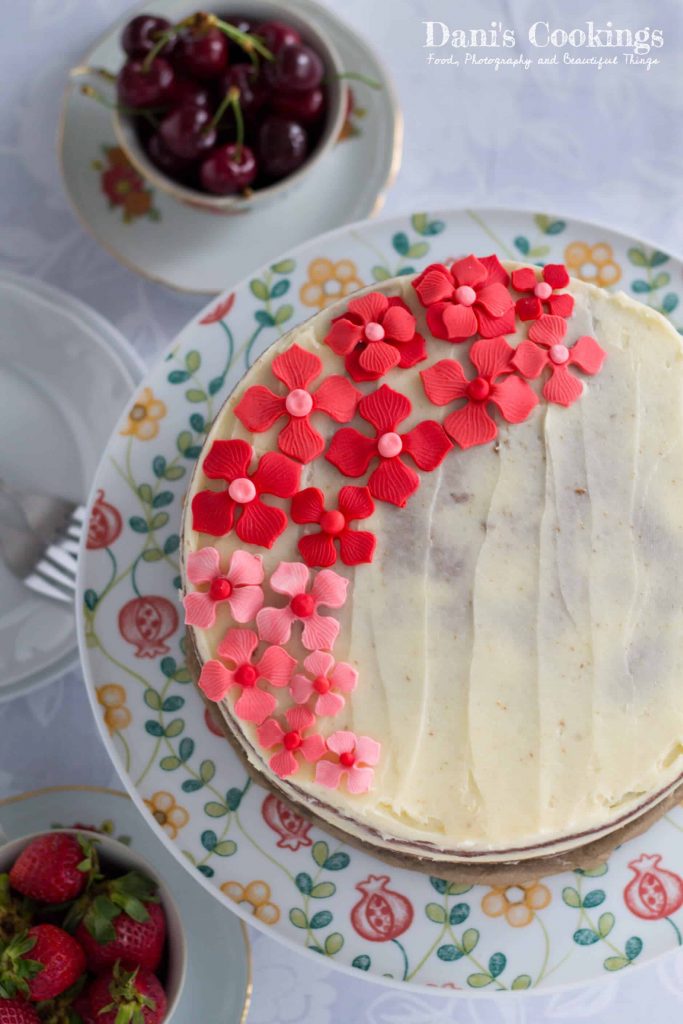 This year I decided to make an experiment and combine cherries and strawberries in a cake. I think I never tried before a dessert with both these fruits together but now I can say affirmatively that they are a perfect match! 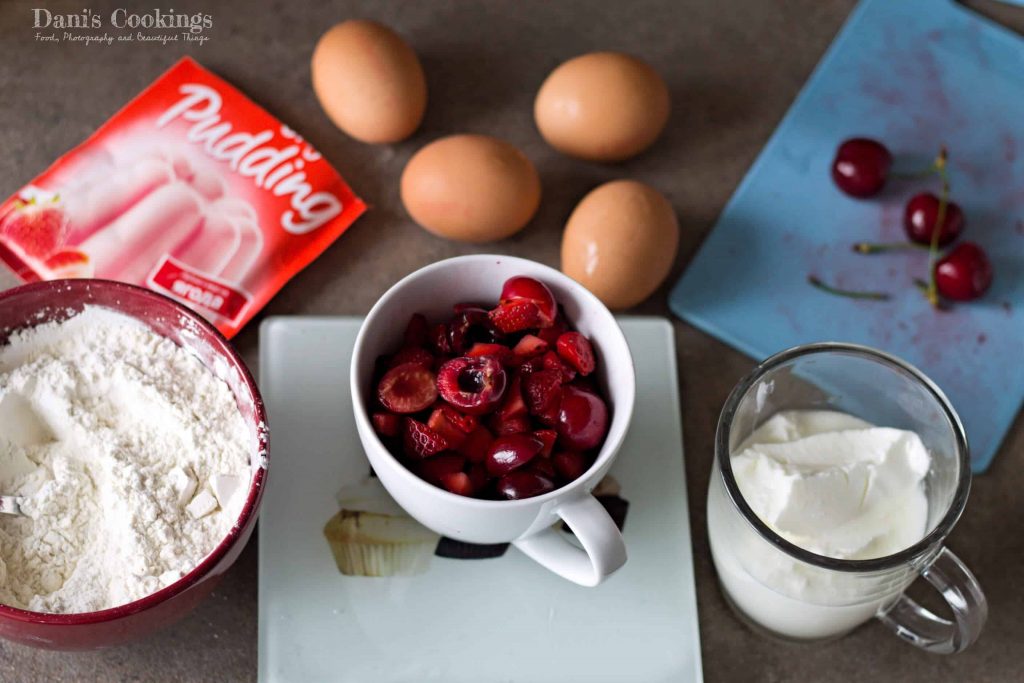 Initially I wasn’t sure what recipe to use for the cake base. I wanted a moist and slightly spongy cake with perfect texture and fruit pieces inside. After pondering for some time, I suddenly had a great idea. 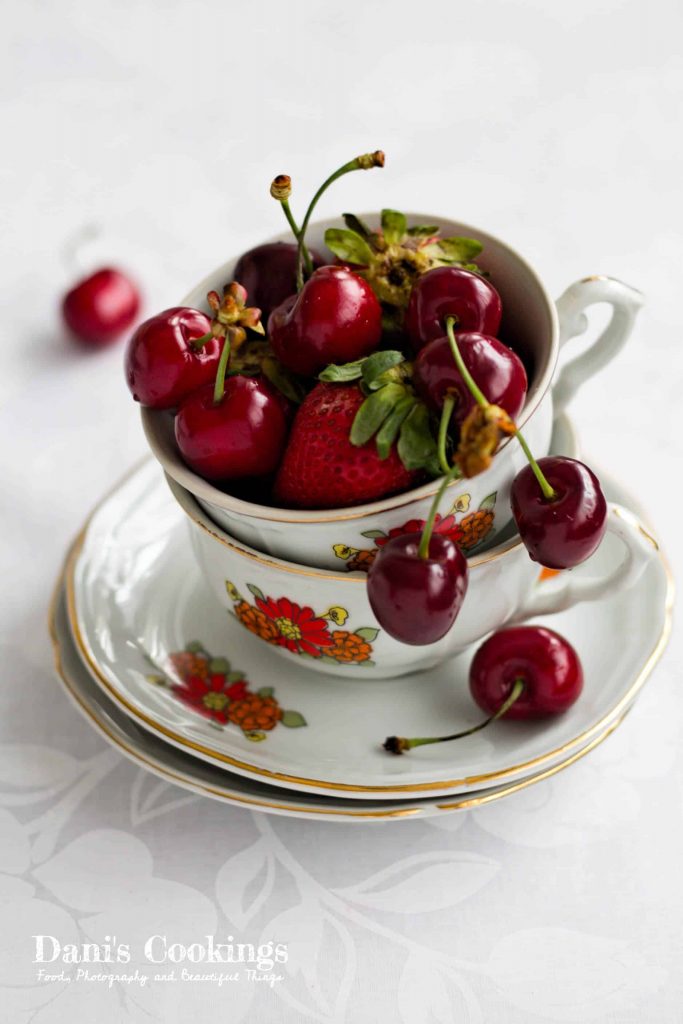 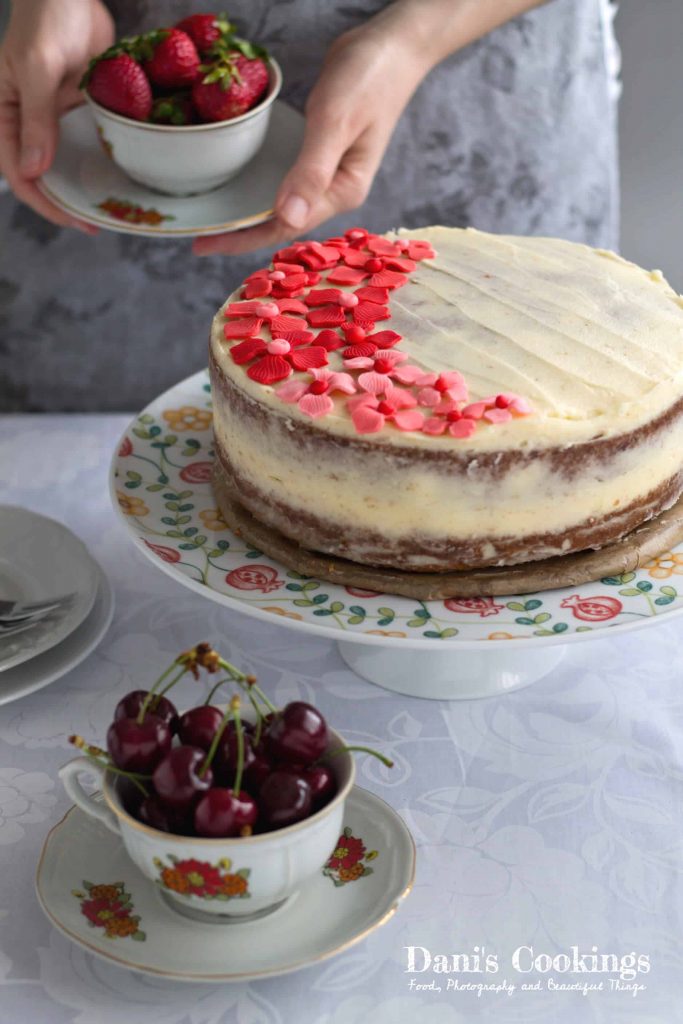 Not sure if I had mentioned before that about 20 years ago I started a notebook which was my first personal cookbook. I was writing there all the successful recipes I had cooked or baked. This was the very first offline predecessor of this blog – sadly forgotten for many years… I remembered that one of the recipes in my notebook was a cherry cake – a bundt cake that I had made several times and it had turned out quite delicious. 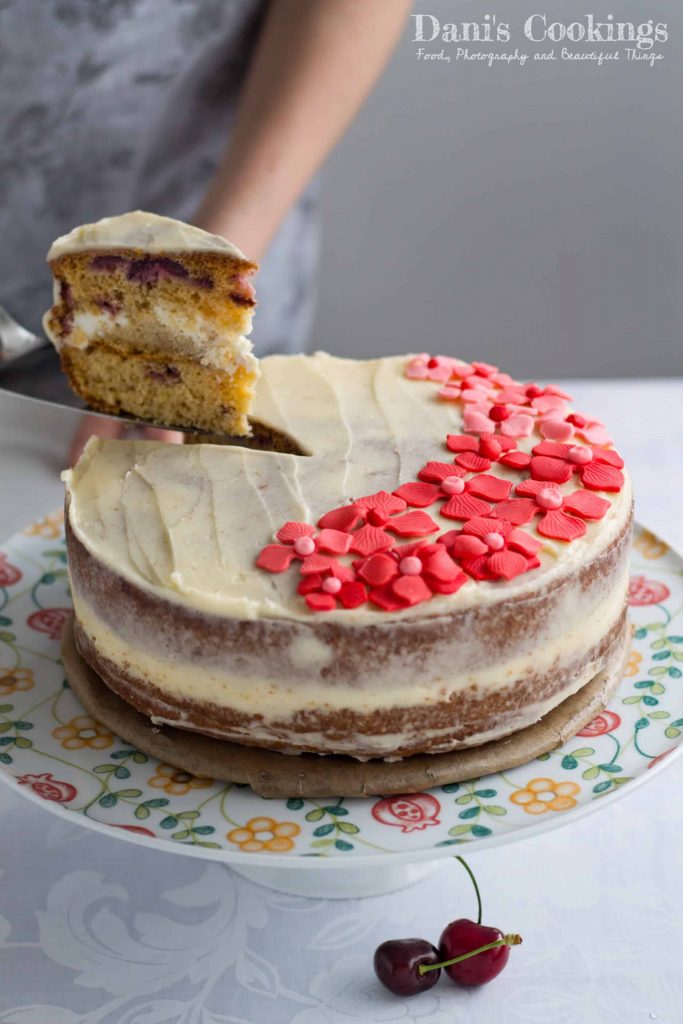 Luckily I still knew where to find this notebook: in my mom’s house. I checked the recipe and I adapted it for the current Easy Cherry Strawberry Layer Cake. Well, as far as I remember, that old recipe was also adapted from one of my mom’s vintage cookbooks dating back from the 1960s or 1970s.
To make the flavour of the cake more intensive I added strawberry custard powder. This little change turned out very successful also for the dessert’s texture because custard powder is literally flavoured cornstarch. 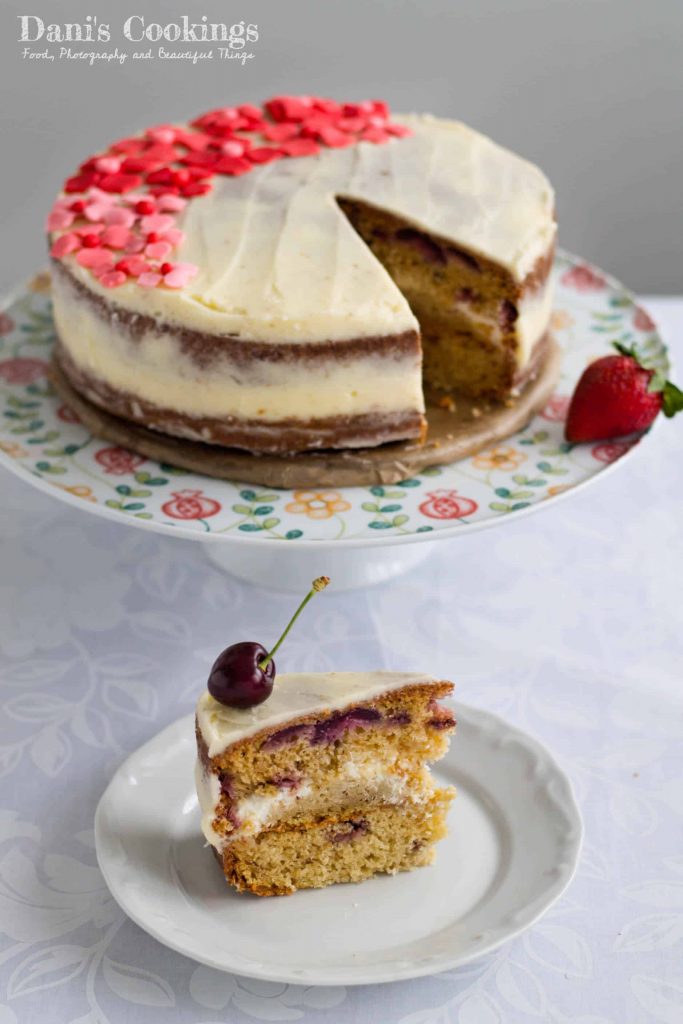 But I also wanted the cake to look pretty, flowery and full of joy. I didn’t have time for much elaboration so I had to keep it simple. I found some fondant in my pantry: just enough to make several flowers on top. I coloured it in different shades of red and I cut flowers out of it with fondant cutters. That was a very easy and relatively fast decoration which created that joyful and pretty look of the cake. Surely you can make it too: just follow the simple instructions below. 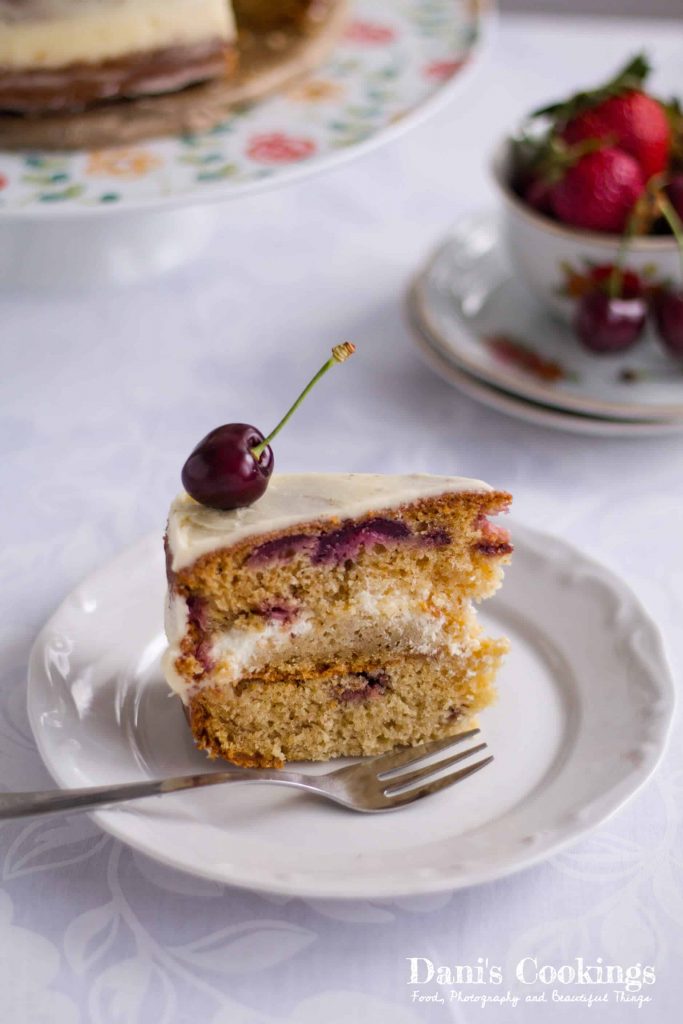 After tasting the finished cake I already new: that was the perfect late spring or early summery dessert! It had a moist, velvety texture, nice strawberry and cherry flavour and cheerful aspect! I just loved that cake – and surely you will love it too when you try it 🙂 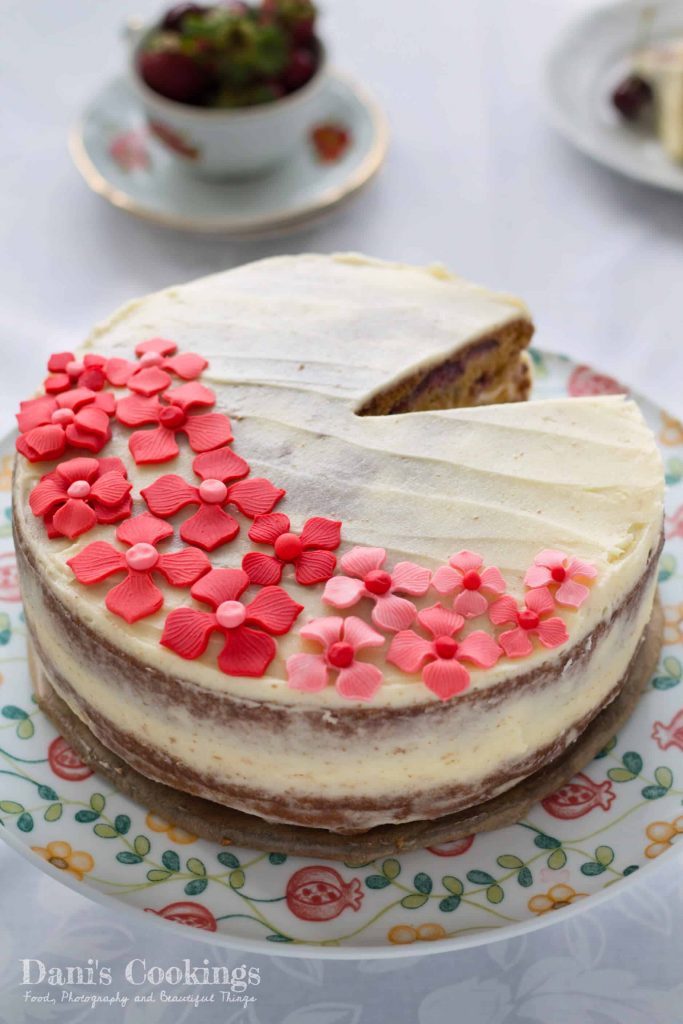 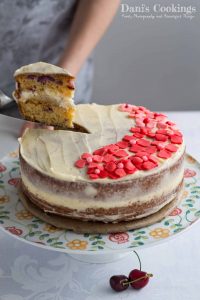 For the Whipped Cream:

For the Buttercream Frosting:

Cake Pan Conversions CalculatorAdapt any cake recipe to your pan with this calculator!
Tried this recipe? Show me your creation!Mention @daniscookings in Instagram or tag #daniscookings!
« Hazelnut Cake with Stracciatella Frosting and Dried Cranberries
Vanilla Cake Roll with Chocolate Mousse »