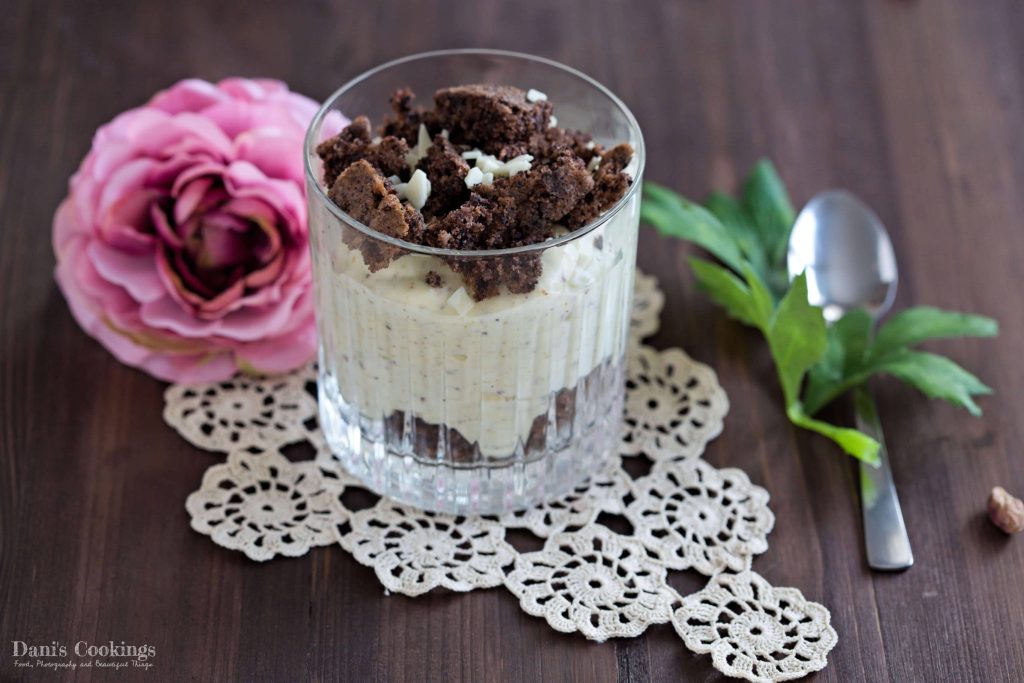 Imagine a creamy dessert with wonderful pistachio flavour garnished with delicious chocolate brownies… That’s exactly what I was craving few weeks ago. That’s how I came up with this Pistachio Cheesecake Mousse with Brownie Bites. 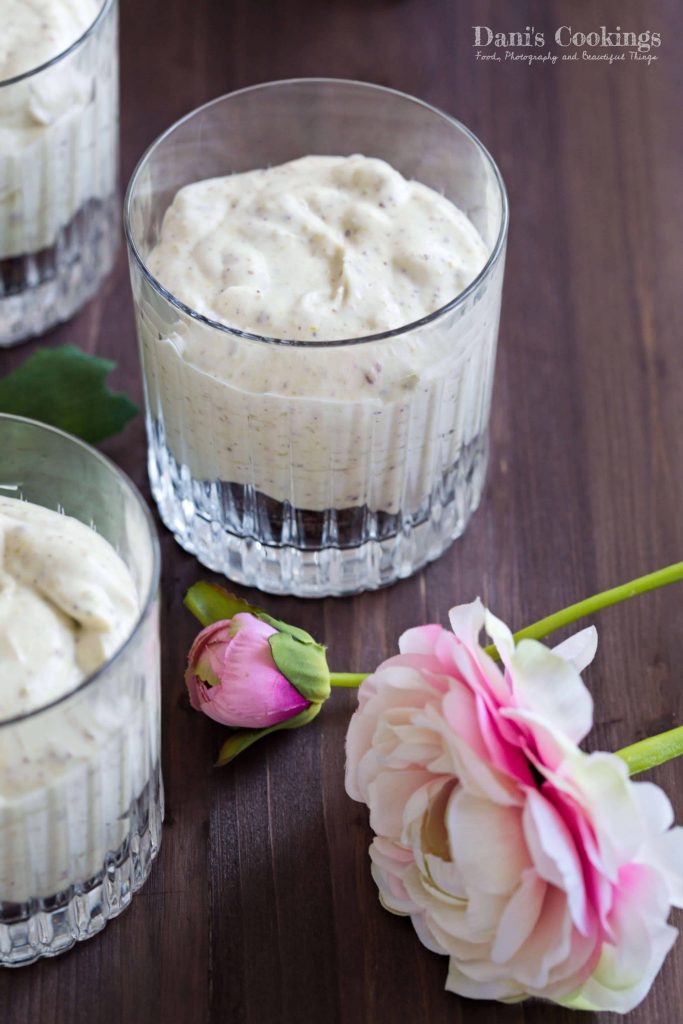 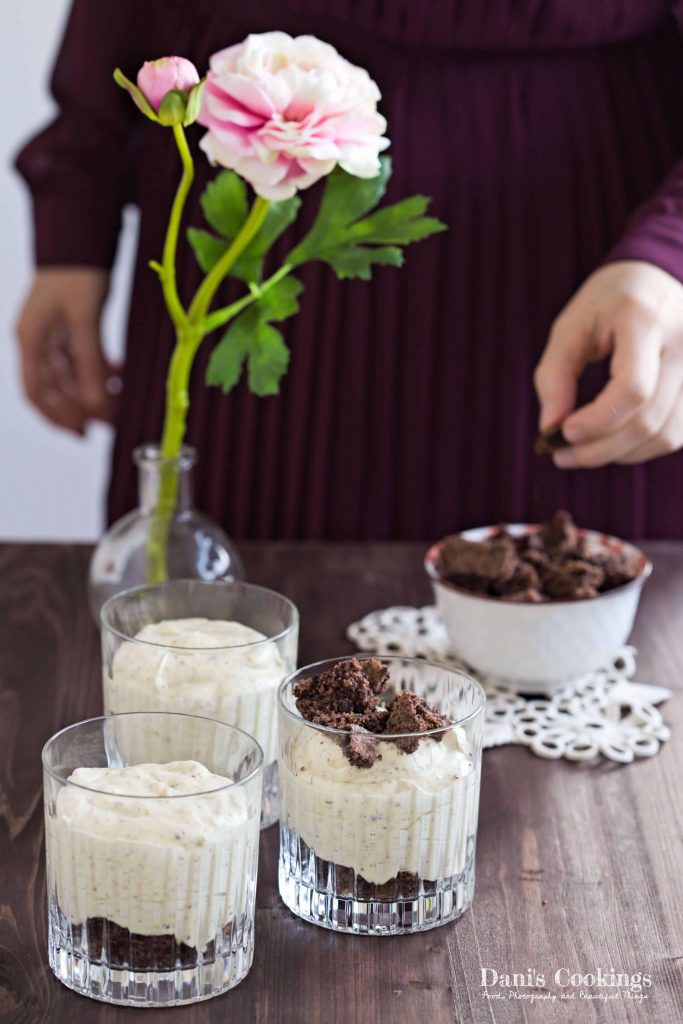 As much as we all love cakes, sometimes we just want to have a fluffy, rich and creamy mousse. The flavour variations could be countless! I started the series last year with my Double Chocolate Mousse with Raspberry Sauce (which is part of my February Challenge, so if you haven’t made it yet, now is the best time to try it). Last month I made also a No Bake Cookie Cake with Lemon Mousse, which was another great success. And now I decided to continue my mousse adventure with pistachio as I really love its flavour (and well, who doesn’t). But as pistachio and chocolate go really well together, I had the feeling that it would be even nicer with brownie bites. That’s much better than adding cocoa into the mousse as it would have covered the taste of the pistachio. 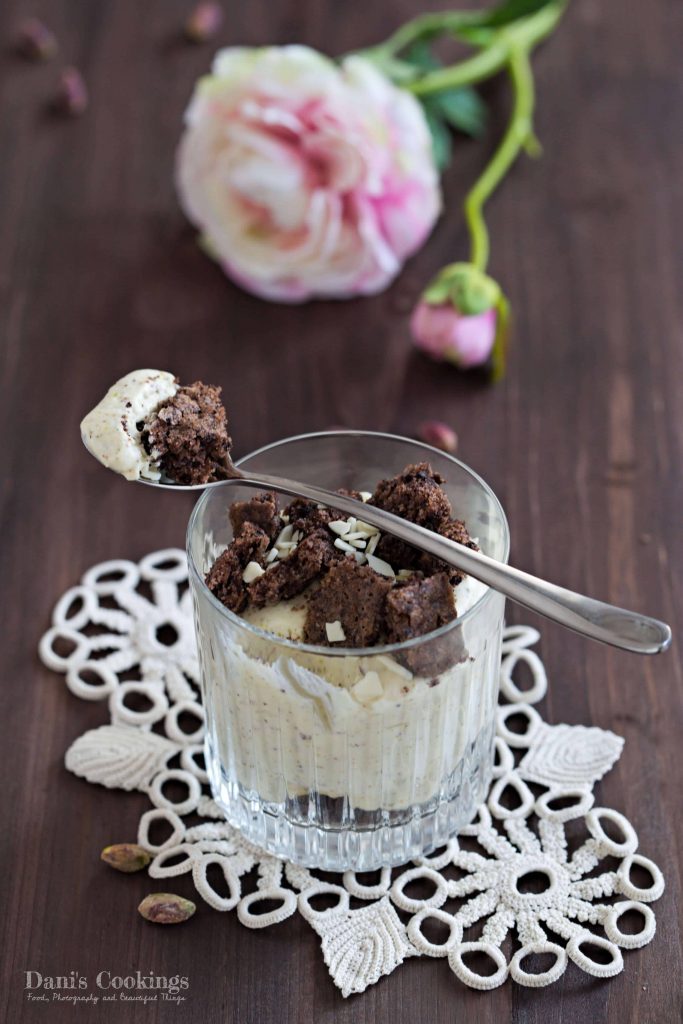 The brownie bites are quite easy to prepare: this is one of the easiest brownie recipes that exist on earth. The yield is quite small so consider using the smallest pan that you own – no matter its shape. After baking the brownie batter, let it cool and then cut it into bite sized pieces. Arrange half of the bites on the bottom of the glasses and the rest – on top of the mousse. And even though it consists of two parts, the complete recipe of this dessert is very easy and straight forward: in fact I made it just in an hour or so one Saturday morning while also baking one more recipe at the same time. 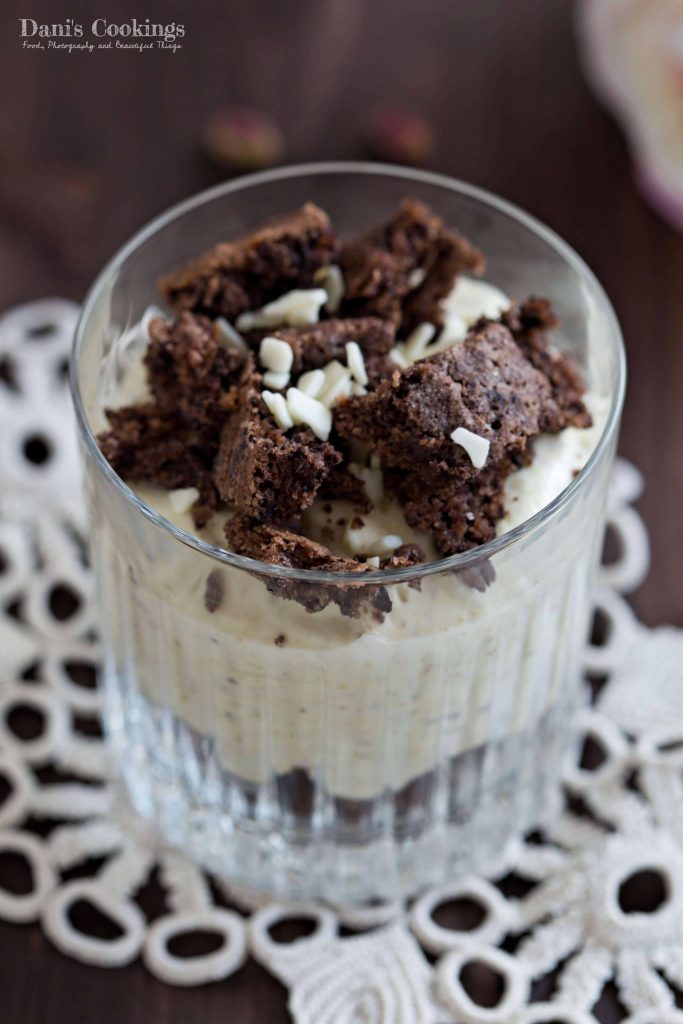 I call this dessert “Cheesecake Mousse” because it is made with cream cheese. Nevertheless its texture is very light and fluffy, so it really feels like a mousse. The brownie bites are a delicious compliment to the wonderful airy feeling. 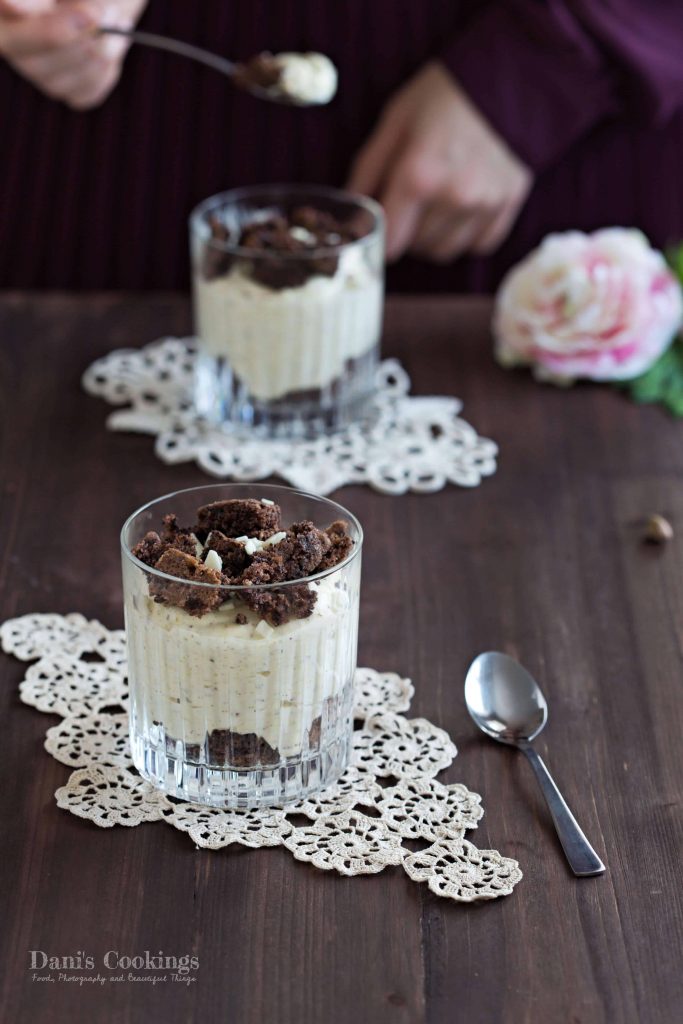 This is an excellent dessert for the Valentine’s Day but it is also great to have on any other day. I am sure everyone in your house will appreciate it, same as my family did! 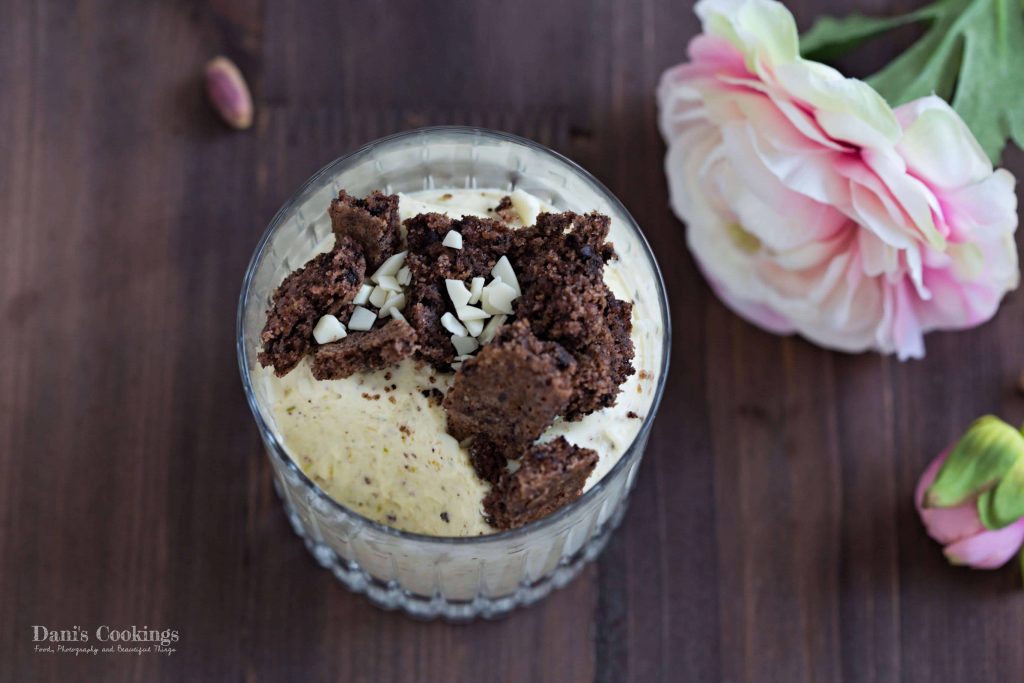 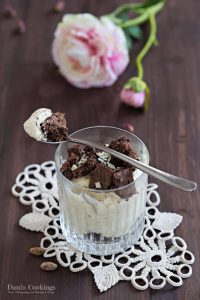 For the Brownie Bites:

For the Cheesecake Mouse: 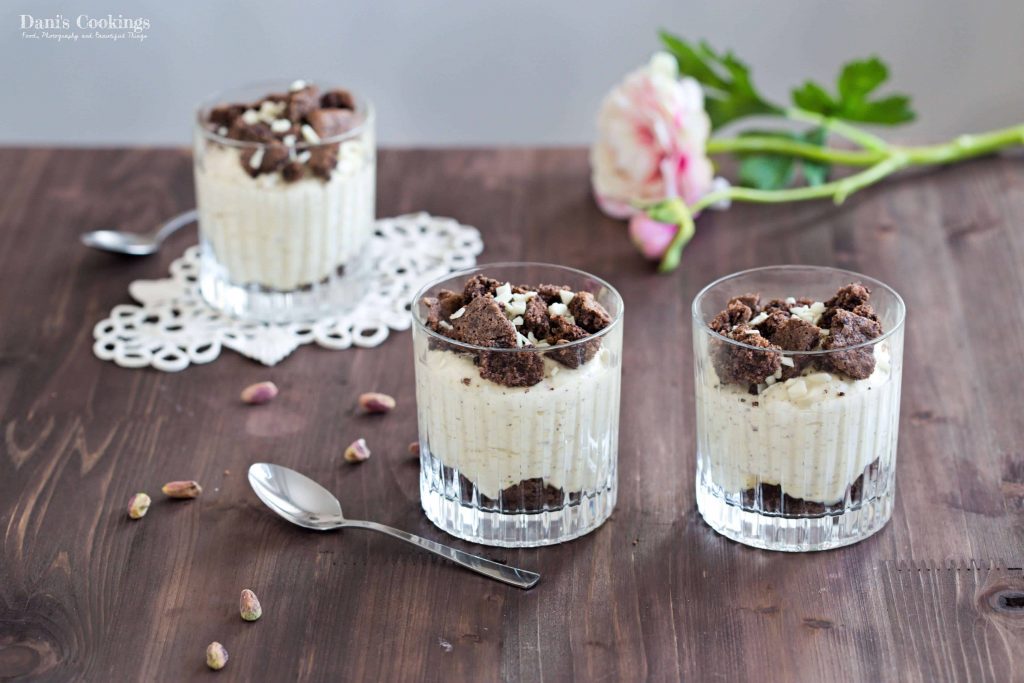