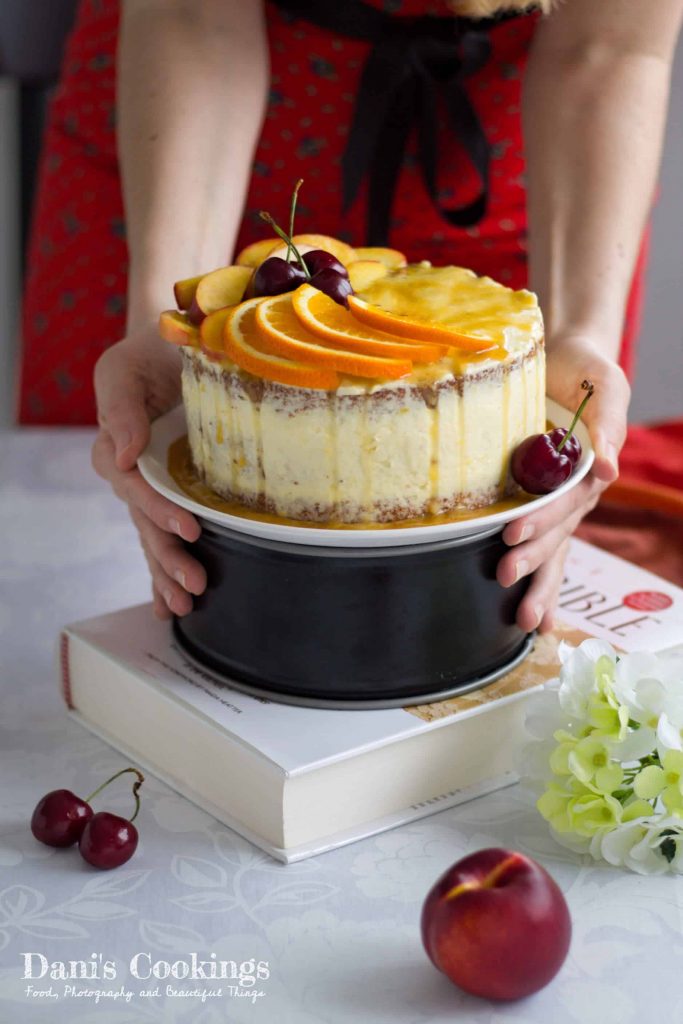 I can’t have enough fruits this summer! I can’t wait for the weekends to arrive just to go hunt for fruits and make deserts out of them. I would use any fruit that I find on the market, even the ones not in season… like oranges. 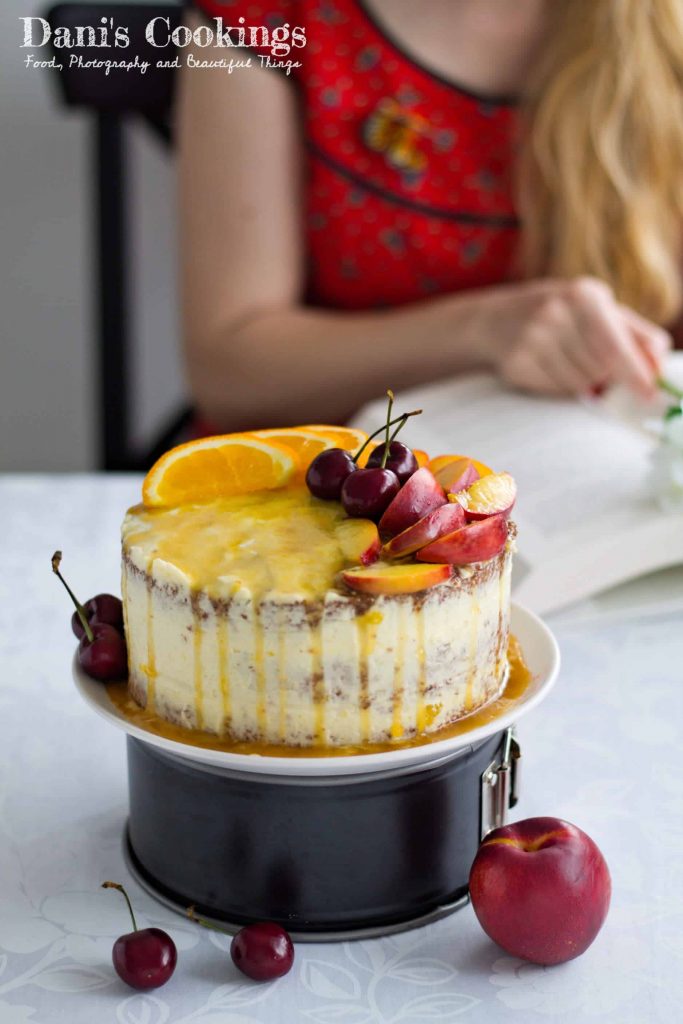 On the day I made that wonderful Orange Cake with Peach Buttercream Frosting I was initially planning to bake a dessert focused on peaches. But you might have noticed that recently I rarely use only one fruit as a star in my desserts. Somehow the combinations of different fruits seem more interesting to me… 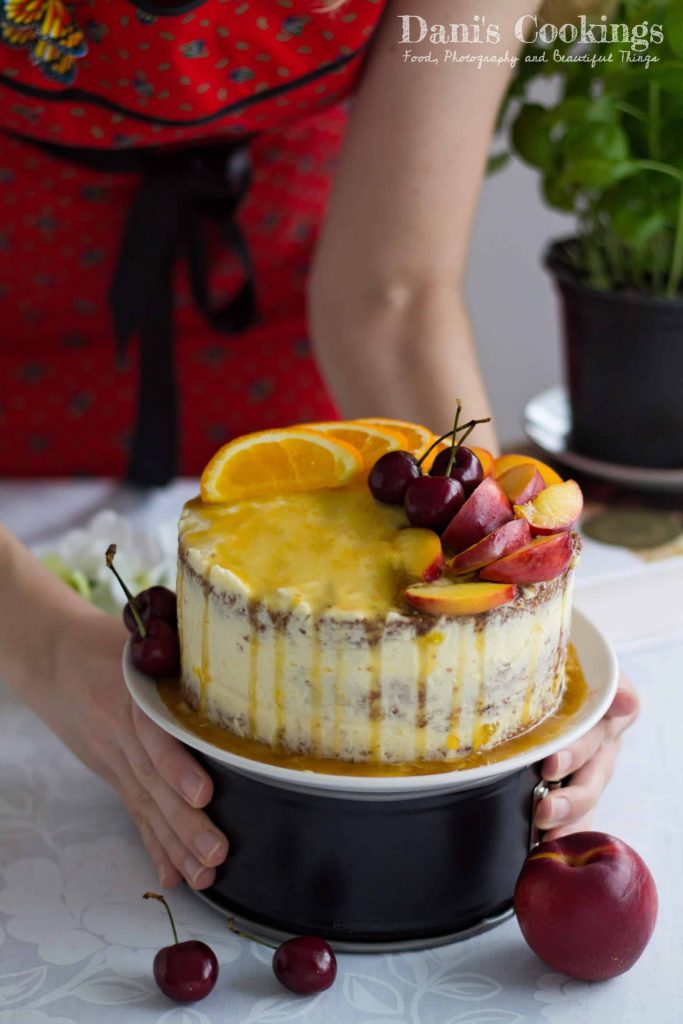 I decided to add some orange flavour because I got inspired by a wonderful recipe from the book The Cake Bible by Rose Levy Beranbaum. The recipe was calling for a very little quantity of orange juice. I thought that it would be fantastic to make a sponge cake with orange flavour and peach frosting. I got so excited by that inspiration that I immediately started putting my plan into action. 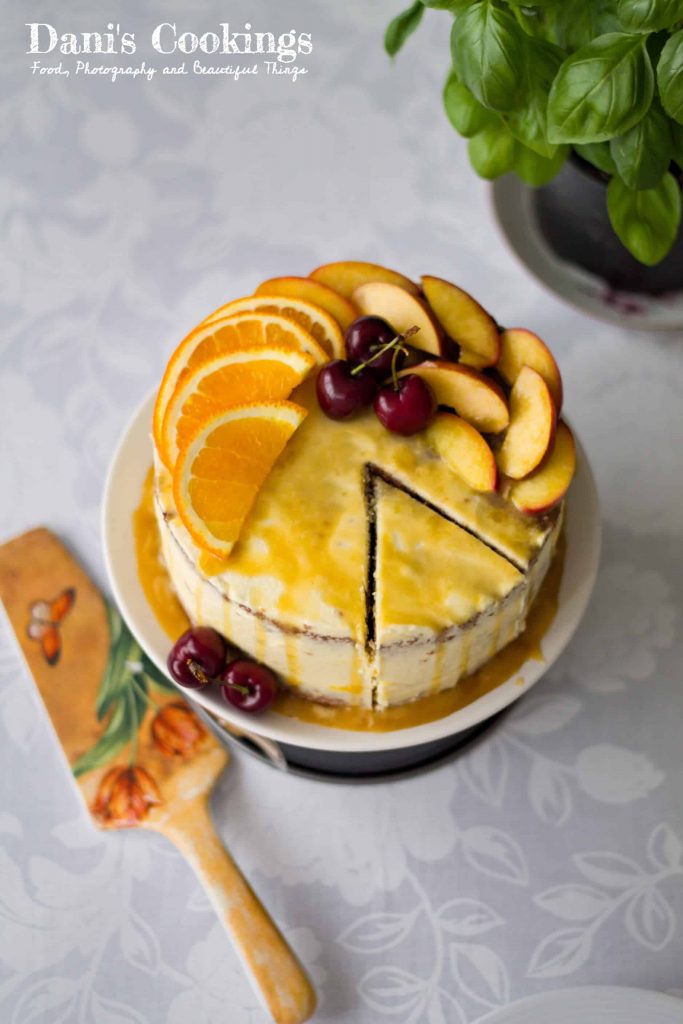 What is the most efficient way to make a cake with a smell and taste of orange? To use orange zest or orange extract. Eventually I did a mix of both: I had in my pantry two kinds of products based on orange zest (one organic and one not) so I used them both for different elements of the cake: one for the cake base and the other one for the orange mousse. I also decided to soak a bit the layers with orange juice… So it was orange all over the place! 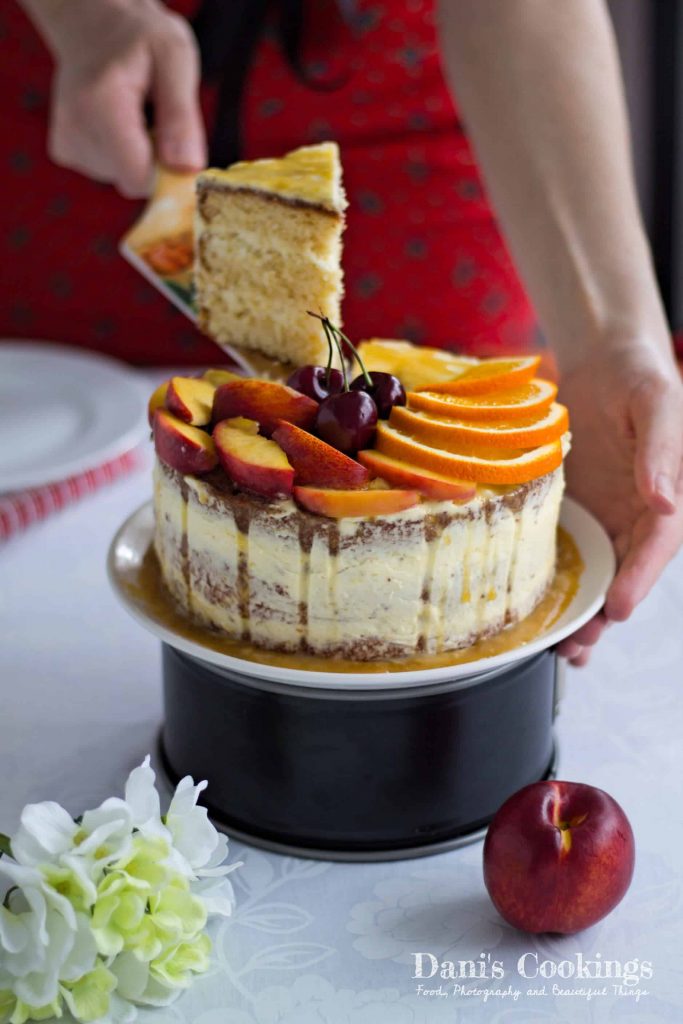 When the cake was assembled and it was time for decoration, a was a bit reluctant. My initial idea was to use just peaches and oranges and to leave the cake semi-naked. Somehow at that point that didn’t seem to me good enough any more. Then I accidentally found that fantastic cake of Linda Lomelino which was a great new inspiration for me. As I love dripping cakes, immediately it came to my mind that I could make a caramel topping and add one more kind of fruit for the decoration just to make a contrast. Which was a fantastic idea because it made the cake so wonderful 🙂 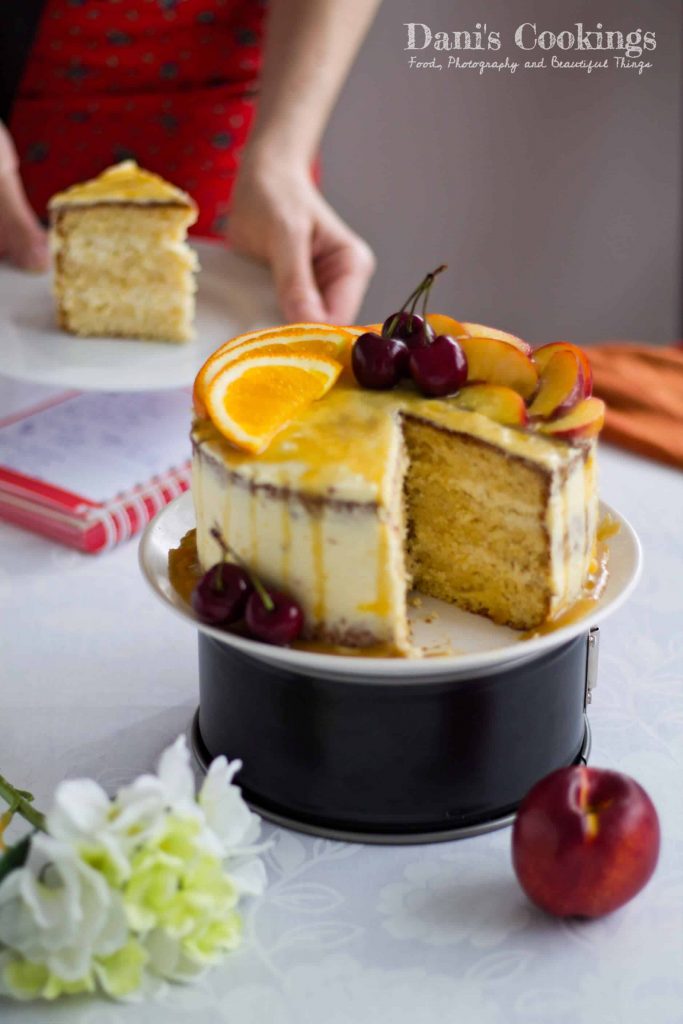 Needless to say that cake was so delicious! I would love to make another one soon, just before the cherries are completely gone for the season. 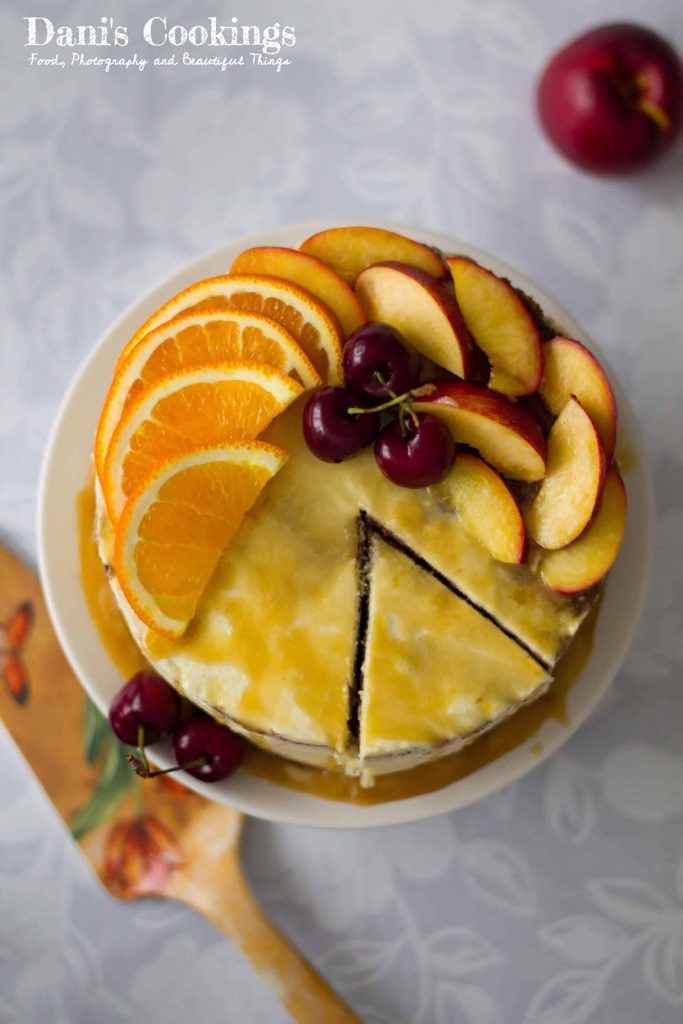 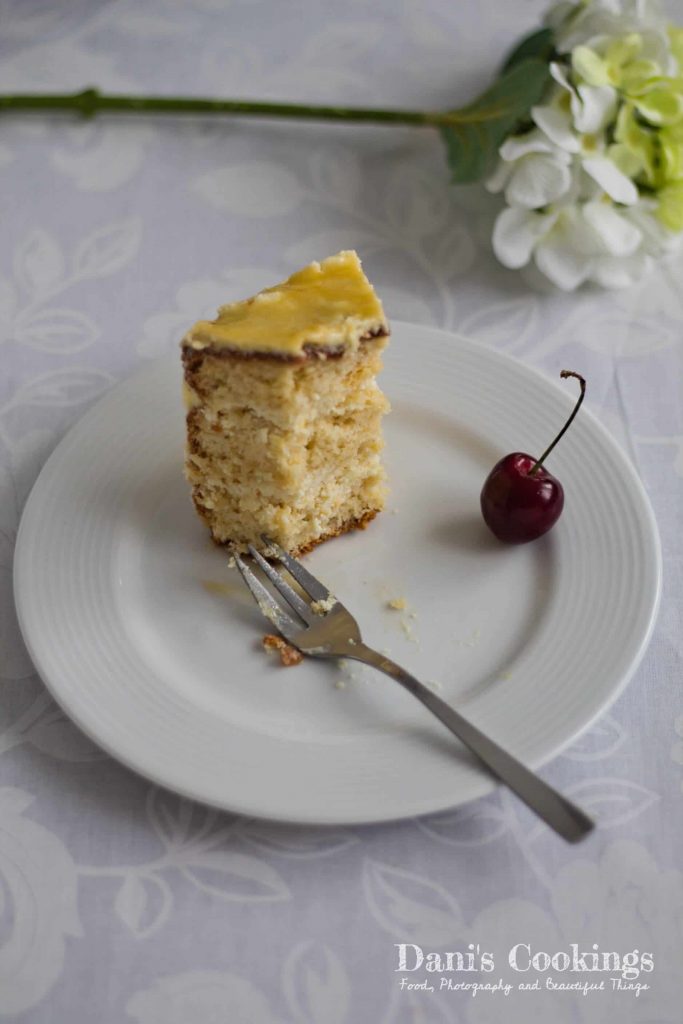 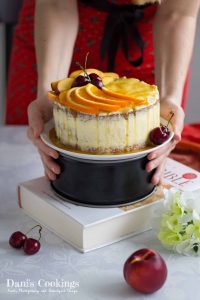 For the orange mousse:

For the peach buttercream frosting:

To assemble and decorate:

Cake Pan Conversions CalculatorAdapt any cake recipe to your pan with this calculator!
Tried this recipe? Show me your creation!Mention @daniscookings in Instagram or tag #daniscookings!
« Apricot Tiramisu with Blueberries
Cheesecake Filled White Chocolate Cups »